From the Azurilland Wiki, a database for the Pokémon series that anyone can contribute to
Jump to: navigation, search
← Thundurus | Reshiram | Zekrom →

Reshiram (Japanese: レシラム Reshiramu) is a Dragon/Fire-type Legendary Pokémon introduced in Generation V that is the mascot for Pokémon Black. Reshiram is the Vast White Pokémon. Reshiram's unique ability is called Turboblaze. It has a move called Fusion Flare, which when used after Zekrom's Fusion Bolt, creates a stronger attack. Reshiram and Zekrom were one whole Pokémon until both split into separate entities, according to old tales. It is part of the Tao Trio, along with its Dragon/Electric-type counterpart, Zekrom, and the Dragon/Ice-type Pokémon, Kyurem. 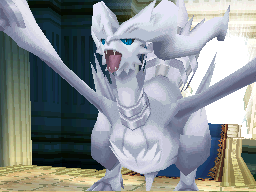 Reshiram is a large, white, Dragon-like Pokémon that seems the share its theme with its counterpart, Zekrom. It has striking blue eyes and several white rings around its thin, swan-like neck and flowing tail, with a single band around each of its hands. It also has feather-like arms that end in four claws and a flowing white mane. Its chest feathers resemble the design of the Silver Wing. The lower portion of its body protrudes outward to a point.

Reshiram does not evolve.