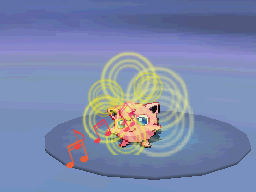 The user sings an ancient song and attacks by appealing to the hearts of those listening. It may also induce sleep. When used by Meloetta in battle, it will also cause it to change between its Aria and Pirouette Formes.