From the Azurilland Wiki, a database for the Pokémon series that anyone can contribute to
Jump to: navigation, search
← Metagross | Regirock | Regice →

Regirock (Japanese: レジロック Rejirokku) is one of the 3 Regis found in the Hoenn region. It is a Rock-type Legendary Pokémon. It is found in the desert. Regirock has a high Defense stat, and has various Physical & Support moves it can use in battle. They are Explosion, Stone Edge, Earthquake, and Curse.

Regirock is a light grey, tan and orange Pokémon with seven little orange dots on it's head that resemble a face. It has two huge orange boulders on it's shoulders and there is one rock right under it's face that is orange, another orange one by it's ankle and three spiky ones on its back. The rest of it's body is a light tan, and it's whole body appears to be made of many separate rocks with cracks between them.

Regirock does not evolve. 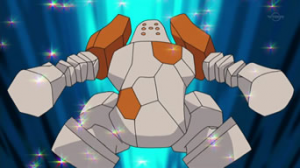 Ash battled with the Pyramid King Brandon or Brandon's Regirock to get the Brave Symbol. Unfortunately, Ash lost the battle and had to challenge him again. The Pokémon also made an appearance in Lucario & the Mystery of Mew as one of the three guardians of the Tree of Beginning, along with Regice and Registeel.