Regions are areas in the Pokémon universe that are smaller parts of a nation. Each region has their own Pokémon Professor, who provides a unique set of Starter Pokémon for young Trainers. Each region also has a unique set of eight Gym Leaders, along with the regional Elite Four. In some cases, regions can share Elite Four divisions, such as Johto and Kanto.

Currently, in the main series of games, there are five known regions (Kanto, Johto, Hoenn, Sinnoh, and Unova ). Additionally, in the Pokémon side games, four other regions are currently known;Orre, Fiore, Almia, and Oblivia. In the Pokémon anime series and manga, a group of islands called the Orange Islands have been called a region. The Orange Islands are located south of Kanto, though this region has never been seen in any game. 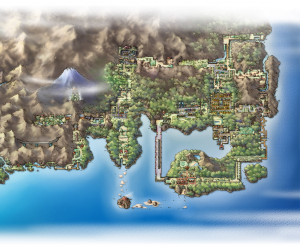 Kanto was the first region to be introduced in the game series, featured in the Red, Blue and Yellow games along with the Generation III remakes. It is also accessible in the latter portion of Pokémon Gold, Silver, and Crystal after defeating the Elite Four.

Like most regions, there is a theme regarding the names of towns and cities in Kanto. Most locations in Kanto are named after a color. The regional Pokémon professor is Professor Oak, who resides in Pallet Town. 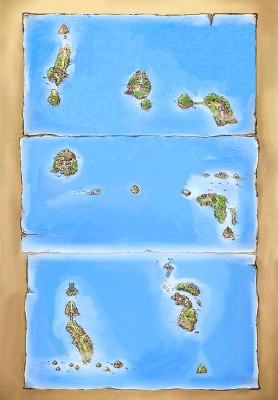 The Sevii Islands are a group of islands located south of the Kanto region. They are not to be confused with the Orange Islands, another island group near Kanto or the Blue Islands near Hoenn. The Sevii Islands are accessible in Pokémon FireRed and LeafGreen after the player defeats Blaine. They serve the purpose of a major sidequest involving Bill and is also where the player can catch Pokémon from Pokémon Gold and Silver. There are nine islands in all, and each of them is accessible once the player does something special. The islanders are ferried between the islands by the Seagallop Hi-Speed 6. 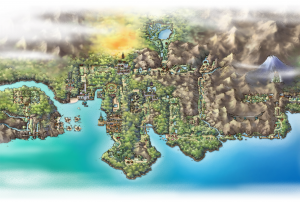 Johto is the second region introduced in the main game series, being featured in the Gold, Silver and Crystal games along with the Generation IV remakes. Geographically, Johto is located to the west of the Kanto region.

The theme for locations in the Johto region is either plants or something related to a plant. The regional Pokémon professor is Professor Elm, who resides in New Bark Town. 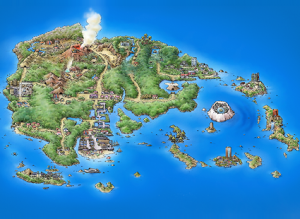 Hoenn is the featured region the the Generation III games, Pokémon Ruby, Sapphire and Emerald. Geographically, Hoenn is located to the southwest of Kanto and Johto.

The theme for the locations in the Hoenn region is that of two words used together. The regional Pokémon professor is Professor Birch, who resides in Littleroot Town.

File:Sinnoh Pt.jpg
The Sinnoh Region and the Battle Zone Sub-region

Sinnoh is the region featured in the Generation IV games Pokémon Diamond, Pearl and Platinum. Sinnoh is located to the north of the Kanto region.

Unlike other regions, there is no theme underlying the names of locations in Sinnoh. The regional Pokémon professor is Professor Rowan, who resides in Sandgem Town, being the first professor to live in a town that is not the player's starting location.

The Battle Zone is an island located to the northeast of Sinnoh. Battle Zone is accessible in Diamond, Pearl, and Platinum after the player defeats the Pokémon League. There are a total of three major settlements and 6 routes. The islanders do not consider themselves a part of Sinnoh. 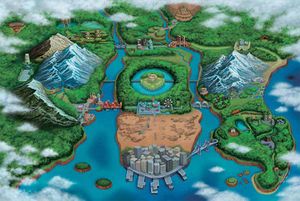 Unova is the region featured in the Generation V games Pokémon Black and White and Pokémon Black 2 and White 2. It is said that Unova is located very far away from the other regions, requiring a boat to get there.

With the exception of Black City, all of Unova's towns and cities are named after clouds or other meteorological terms. The regional Pokémon professor is Professor Juniper, who is the first regional professor to be female. She resides in Nuvema Town.

Orre, which is based off the Arizona desert, is located on the northwest portion of the Kanto-Johto landmass and is generally a Wild Pokémon free region in Pokémon Colosseum and Pokémon XD. In Pokémon XD a few wild Pokémon can be captured in special locations. In both games, Pokémon called Shadow Pokémon can be "captured" from other Trainers to be purified.

Fiore is the setting for the first Pokémon Ranger video game. It may be somewhat close to the Sinnoh region, since it was stated in-game that Sinnoh was the closest region to send the Manaphy Egg during the Manaphy event.

Almia, located east of Fiore, is the setting of Pokémon Ranger: Shadows of Almia.

Oblivia, located south of Fiore, is a group of islands in which Pokémon Ranger: Guardian Signs takes place.

Ransei said to be similar to feudal Japan. There are 17 Kingdoms in the region, each with a leader that must be defeated to conquer the kingdom and castle.

The Ransei region is shaped the same way as an Arceus. 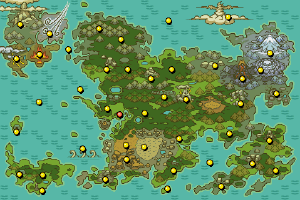 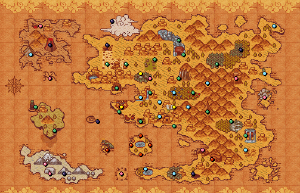 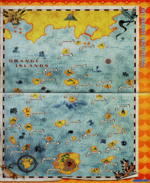