From the Azurilland Wiki, a database for the Pokémon series that anyone can contribute to
(Redirected from Red (game))
Jump to: navigation, search

Red (Japanese: レッド) also known as Fire (ファイア Fire) is a very powerful Pokémon Trainer from Pallet Town, Kanto. He is the first character to be playable in the Pokémon series and his initial appearance is set in the Generation I main games. He has since then made various appearances in Pokémon media, including the Generation III remakes of Pokémon Red, Green and Blue, Pokémon FireRed and LeafGreen. Red is also known to be one of the final trainers you fight in the Generation II games.

Unlike Brendan, who is extremely quirky, Red is a very serious person, especially when he battles. This can be seen easily because he seldom smiles.

Red does not appear himself in the anime, but Ash is his anime counterpart.

His first Pokémon was a Poliwag, which evolved into a Poliwhirl when saving him from drowning prior to the beginning of the story, and evolved once more into a Poliwrath in Buzz off, Electabuzz!

Red is eleven years old at the beginning of the Red, Green & Blue chapter. He is first seen in A Glimpse of the Glow, when he shows a group of children the proper way to catch a Pokémon. He demonstrates by using his Poliwhirl to battle a wild Nidorino. Red is very sentimental, as shown in the battle versus Blue in the ninth annual Pokémon League tournament. He believes that defeating an opponent is no fun if they are at a disadvantage, as seen in both The Secret of Kangaskhan and Make Way for Magmar!. At the beginning of the series, he is quite cocky, as shown in Suddenly Starmie. However, this cockiness has subsided by the end of the RGB saga.

Red's special skill, as described by Professor Oak, is Pokémon battling. As such, he is called the "Fighter" (戦う者Fighter). In later adventures, Red has been viewed as a leader amongst the Pokédex holders.

In Red and Blue (Green in Japan) Red is the only playable character. The player advances through the game as

Red's Artwork in Red and Blue

Red with, as usual, a name of their choice. He also appears in their remakes, FireRed and LeafGreen, with the same purpose.

In Pokémon Gold and Silver and Crystal, and their remakes, Red is fought at Mt. Silver, in which he has Pokémon similar to Ash of the anime (except for the fact that all three starters are fully evolved compared to Ash only having one fully evolved). Red also retakes this role in Pokémon HeartGold and SoulSilver. You can battle once again by defeating the Elite Four. 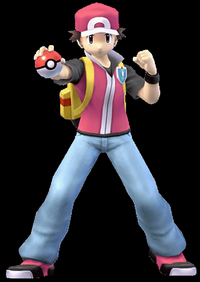 Red also makes a appearance in Super Smash Bros. Brawl as the Pokémon Trainer, he is accompanied by Squirtle, Ivysaur, and Charizard and is a newcomer. He only talks when switching Pokémon and when he wins. He does not fight but instead is shown in the back round comanding his Pokémon (using special-down will switch them during battle). In story mode he follows the character if he is being used until they get to a point where he is unable to continue, however he will be warped infront of the character at certin times. Each Pokémon he uses is different in weight and evolution. Squirtle is a light weight and is not evolved at all, Ivysaur is an averaged out middle whight and a has evolved once. Charziard is a heavy weight and is fully evolved.

Red is first introduced when Lucas bumps into him and both are surrounded by Primids. Red uses Squirtle (the only Pokémon available at the start of Red's appearance) to defeat them and continues to go search for more pokémon (in which Lucas goes with him). They then go to the ruins to find Charizard and Ivysaur but before they continue then are attacked by Wario but beat him. During the story, Red finds Ivysaur as a trophy (likely due to a lost battle with Charizard) and captures it with a Poke Ball, and battles Charizard and captures it as well. He and Lucas then reach the end if the ruins and battle Galeom who fell though the top. After the battle galeom reveals to be a bomb and grabs Lucas and Red (he becomes knocked out). However Lucas frees them and they are saved by Meta Knight. They then go with Marth, Meta Knight and Ike. They then go to a mountian where a battle is taking place, inwhich ends with an army from subspace coming to attack but they defeat them (with help from Mario, Link, Kirby, Pit, Yoshi and Ice Climbers). They then meet up with the heroes that were in the Halberd and the Bomb Factory. He (along with the others) go to subspace to defeat Master Hand. However he is defeated with the others by Tabuu. If he is found by King Dedede, Luig and Ness he will go to fight Tabuu.