From the Azurilland Wiki, a database for the Pokémon series that anyone can contribute to
Jump to: navigation, search
← Groudon | Rayquaza | Jirachi →

Rayquaza (Japanese: レックウザ Rekkuuza) is a Dragon/Flying-type Legendary Pokémon, as well as the version mascot for Pokémon Emerald.

Rayquaza makes its debut in the 7th movie Destiny Deoxys. Like all other Legendary Pokémon, Rayquaza is a truly powerful Pokémon. Four years before the main movie, Rayquaza had fought against Deoxys because it thought the Pokémon was invading its territory when the meteorite Deoxys used for travel landed on the earth.

Rayquaza and Deoxys fought fiercely against each other and although Deoxys versatility had given it the upper hand, Rayquaza took it by surprise and defeated it with a Hyper Beam, destroying it's body completely. However, Deoxys's crystal was unharmed and it managed to regenerate it's body and set out to recover its friend, which was another Deoxys. Rayquaza senses Deoxys's presence and flew to LaRousse City to once again battle Deoxys.

Upon arriving to LaRousse City, Rayquaza and Deoxys fought. Deoxys blocked it's violent intrusion by putting a shield around the city, preventing Rayquaza from defeating Deoxys or interfering with it's search. After the many attempts Rayquaza penetrated the shield and entered the city, attacking Deoxys. Meanwhile, Deoxys's friend was being revived by Ash and Tory using a large cutting laser to free its crystal. After they succeeded in doing so, the Deoxys was reunited with its fellow Deoxys. Both of them were able to defeat Rayquaza.

The security system in the city however, was sent out of control by Rayquaza's nearly uncontrolled attacks which caused damage to the city's defense system control computers locking them into emergency mode. Tory's father contacted them and explained that the system's security would unlock if an I.D. card was scanned into the security-bot leader. Ash dodged through a large tsunami of security robots to reach the security-bot leader and scanned the card. This deactivated the control lockout long enough for the system to be shut down. Rayquaza was helped out of the large pile of security bots by both of the Deoxys, then knowing they meant him no harm, returned to his habitat in the atmosphere, after that the Deoxys left the city peacefully.

Rayquaza does not evolve.

Rayquaza is a Generation III Pokémon, first appearing in the Pokémon Ruby and Sapphire games. In 2005, Rayquaza became the version mascot for the Pokémon Emerald game. In all three games, Rayquaza can only be obtained at the Sky Pillar. It can be caught after the eighth Gym, making for an easy Elite Four.

In the Hoenn region's mythology, it was said that Rayquaza stopped the fighting between Groudon and Kyogre. It lives in the ozone layer far above the clouds and cannot be seen from the ground. It is noted for protecting its territory fiercely.

Rayquaza is Level 70 when the hero faces it in Pokémon Emerald, it has starting moves Extreme Speed, Outrage, Rest, and Fly.

In Red Rescue Team and Blue Rescue Team, Rayquaza plays a key role in the story. Xatu warns all of the Pokémon in Pokémon Square that a large star is falling and is going to destroy the planet, and says that the only way to get rid of it is to ask Rayquaza to destroy it. The main character must use Xatu's teleporting stone to reach the Sky Tower, where Rayquaza dwells. When the main character meets Rayquaza, it is extremely enraged to see that Pokémon from the ground have come "where they are not supposed to be". When the player beats Rayquaza, it will realize its mistake. The star that will destroy the planet is coming near, so Rayquaza blasts it with its Hyper Beam. The blast is so overwhelming that the main character and his partner fall off of Sky Tower.

It can also be found in HeartGold and SoulSilver in the Embedded Tower, using the Jade Orb obtained from Professor Elm in a Pokémon event. 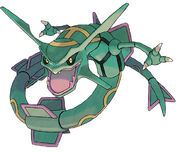 A Rayquaza close up

Rayquaza is the second main boss the player must fight in Super Smash Bros. Brawl's Adventure Mode, The Subspace Emissary. Diddy Kong runs to find help for Donkey Kong, and comes across a large lake. He notices a destroyed Arwing nearby, and goes to investigate. Rayquaza appears out of the lake, angry that Diddy trespassed into its territory. It grabs Diddy, but Fox emerges from the Arwing and uses Fox Illusion to free Diddy Kong from Rayquaza's grasp. The two quickly team up and defeat Rayquaza. Rayquaza's appearance is also notable because it is the only boss in The Subspace Emissary who is fought by a group that does not include any other characters from its own series.

It is interesting to note that Rayquaza was found within the lake as opposed to its usual dwelling, the sky.

Rayquaza appears later in the Great Maze, as one of the eight bosses the player must face before completing the adventure.

Rayquaza also appears in Brawl's stadium, in a mode called Boss Battles. Rayquaza is one of the ten bosses that the player must fight.