From the Azurilland Wiki, a database for the Pokémon series that anyone can contribute to
Jump to: navigation, search
← Rattata | Raticate | Spearow →

Raticate (pronunciation: RAT-i-keyt) is a Normal-type Pokémon introduced in Generation I. It is the evolved form of Rattata.

Compared to Rattata, Raticate is far more of a predator, and the majority of its features are adapted for this purpose. Its most notable feature are its large teeth; like most rodents, Raticate's teeth grow continuously throughout its life, and must be constantly worn down by gnawing. It is also known that Raticate's fangs are tough enough to break concrete. It has long whiskers and a long tail. Raticate looks like a rat, just like Rattata. Raticate tends to stand on its hind legs, as opposed to its pre-evolution.

Raticate's webbed feet allow it to swim well when it hunts its prey.

Raticate is the evolved form of Rattata as of level 20. 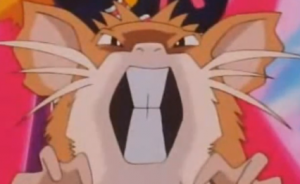 Raticate appears to be based on a large aquatic rodent. Many of its traits resemble those of the coypu, such as its prominent teeth, thick white whiskers, and large size; its small nose and light brown fur more closely match a muskrat.