From the Azurilland Wiki, a database for the Pokémon series that anyone can contribute to
Jump to: navigation, search
← Cranidos | Rampardos | Shieldon →

Rampardos is a large, bipedal, dinosaur-like Pokémon. Like its pre-evolved form, Cranidos, it is based on the real life Pachycephalosaurus, having long hindlimbs and short forelimbs, and also having an extremely thick skull roof. Its eyes are dark red and very close to the blue dome on the top of its head. There is less blue on it then Cranidos but there are some rings of blue on its wrists, neck It has several spikes covering it including its head, knees, neck and two very small spikes near the tip of its nose.

Rampardos is one of three Pokémon to have the ability Mold Breaker. This ability allows its moves to strike through any opponents abilities. Rampardos also possesses a large amount of power, like its pre-evolved form, though much more. Its main attacks involve its head, which it rams into opponents when using various attacks such as Zen Headbutt and Head Smash. 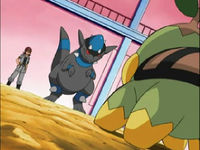 Rampardos made its first appearance in the episode Wild in the Streets. It was during this episode that Gym Leader Roark's Cranidos evolved into a Rampardos.

Rampardos was used again in the next episode O'er the Rampardos We Watched, where Roark used it in a Gym battle against Ash in the rematch between them. Rampardos was Roark's final Pokémon, as his first two were defeated by Aipom and Pikachu, but Rampardos powered through both of Ash's Pokémon leaving him with just Turtwig. Using a combination of strategies Ash and his Turtwig overcame Roark's Rampardos and won the Coal Badge.