From the Azurilland Wiki, a database for the Pokémon series that anyone can contribute to
(Redirected from Raimon City)
Jump to: navigation, search

Nimbasa City is a vibrant city of entertainment in central Unova. There are three routes connecting to it: to the south of the city is Route 4 and the vast Desert Resort, to the west is Route 5, and to the east is Route 16.

Nimbasa City is the most populous city in the Pokémon world and known as the city of leisure. This reputation has been gained thanks to large investment in this sector; many of the buildings are dedicated to entertainment and it only has two residential buildings. It wastes a lot of electricity causing Black City to conserve electricity.

The city boasts its own theme park with a ferris wheel and Gym, a Big Stadium, a Small Court, a Pokémon Center, and the Battle Subway, as well as being the home of the Pokémon Musical.

In contrast to the city's buildings and bright Poké Ball banners, the many water fountains and benches scattered around lend the city an air of relaxation, and make it one of the most beautiful cities in the Pokémon World. 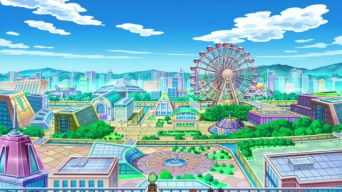 Nimbasa City in the anime

It is also renowned by Trainers as a major destination for Pokémon Battles. In addition to sports being played in the Small Court and Big Stadium, players and fans alike are keen on battling. More famously, the Battle Institute in the west and the Battle Subway in the Gear Station are dedicated to battling, with a variety of Battle modes available to test your skills. The Gear Station is also the only way to access Anville Town.

When you first arrive at the city, you'll see Team Plasma attacking an old man. When you've beaten the grunts, you find out that the man owns the Unova Day Care Center. As a thank you for saving him, he gives you a Bicycle. Also from this point on, you can leave two Pokémon at the Day Care Center, enabling breeding.

Afterwards, Bianca shows up en route to the Pokémon Musical, a place where your Pokémon can dress up and dance to music. If you follow her into the Theater, the owner will give you a Prop Case. When you exit the Theater, Bianca's dad is outside and tries to convince her to come home. Elesa intervenes and convinces him that Bianca will be just fine. 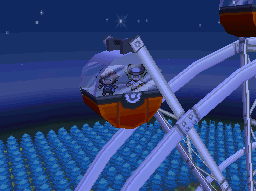 On the wheel with N.

In the amusement park to the east of the city, N will ask to ride the ferris wheel with you. Whilst looking down at Nimbasa City, N reveals that he is the King of Team Plasma and challenges you to a Battle.

A place to test to test your battling skills post-game. Three Pokémon are used in single battles and four Pokémon participate in double matches, with five Trainers in a row to take on. No duplicate Pokémon or held items are allowed and Pokémon are set to level 50. 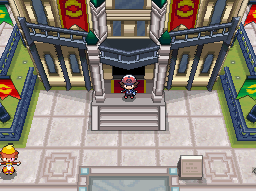 The majority of the trains here are dedicated to the Battle Subway, a place where you can partake in single, double or multi-battles. Another train on the brown line can take you to Anville Town; this is the only way to visit the quiet, remote town.

Depending on the day you'll find different Sports Trainers inside. After completing N's Castle there will be more Trainers as well as an increase in their Pokémon's level. Some of the Trainers will give you items after you defeat them.

Depending on the day you'll find a different Sports trainers inside. After N's Castle there will be more Trainers as well as an increase in their Pokémon's level. Some of the trainers will give you items after you defeat them.

On Wednesday and Saturday.

After beating Elesa, you can battle a Trainer here once per day. The Trainer varies depending on your gender and the season.