From the Azurilland Wiki, a database for the Pokémon series that anyone can contribute to
Jump to: navigation, search
← Pikachu | Raichu | Sandshrew →

Raichu (pronunciation: RAHY-choo) is an Electric-type Pokémon introduced in Generation I.

Raichu is a rodent-like Pokémon, sort of similar to its previous forms. Unlike Pichu or Pikachu, which both have yellow fur, Raichu has an orange-brown fur. Additionally, its electrical sacs are yellow, unlike its previous form's red coloring. Raichu also have a long, thin, black tail that ends in a large lightning bolt shape. Male Raichus have larger "lightning bolt tails" than females. They are also bigger than their previous evolved forms.

Raichu is the evolved form of Pikachu, and the final evolutionary form of Pichu. Pikachu can evolve into Raichu by the use of a Thunder Stone.

Raichu made its debut appearance in the episode Electric Shock Showdown, under the ownership of Lt. Surge, the Gym Leader in Vermilion City. In this episode Ash's Pikachu is defeated in a one-on-one battle with Lt. Surge's Raichu, which then leads to Surge commenting on how Ash could never defeat his Raichu because his Pikachu was too weak.

Ash and Pikachu both, refusing to go through with evolving Pikachu in order to increase its power, face off against Lt. Surge again, this time using speed rather than power. By tiring Raichu out, Pikachu defeats Raichu and wins the battle.

Another Raichu, under the ownership of a trainer named Sho, was seen in Pika and Goliath!. Sho's Raichu used Hyper Beam at point blank range on Ash's Pikachu causing it to be in critical condition. This episode was very similar to the previously mentioned Electric Shock Showdown episode.

Another Raichu, named "Sugar" was seen under the ownership of an elderly woman named Abigail in the episode Cooking up a Sweet Story. 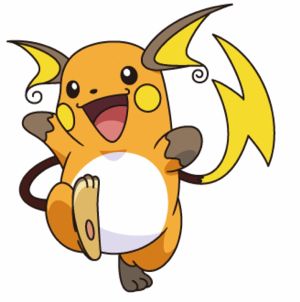 Raichu in the anime

The name Raichu originates from the Japanese word rai, which means "thunder," and "chuu," a word referring to the squeak made by a mouse. Its name is also very similar to the Raiju, a lighting creature from Japanese mythology.