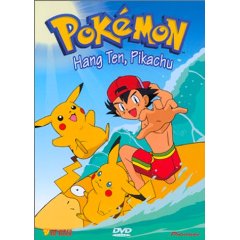 Puka (Pikachu with blue eyes) is seen upon the surfboard on the front of the VHS featuring episode 67.

Puka is a Pikachu with blue eyes that was revealed in episode 67 of the Pokémon Anime. It was only mentioned or seen in this episode, and never seemed to get any fan recognition after the episode.

Puka, was owned by Victor, a surfer. Victor had rescued Puka from the sea, and had taken him in.

The second reference to a surfing Pikachu came from Pokémon Yellow, where there was a mini-game called Pikachu's Beach in the house on Route 19. The mini-game can only be played if the player has a Pikachu with the move Surf with him.

There have been several special events where Nintendo has given the public chances to obtain their very own surfing Pikachu. The most recent event occurred in 2008. There is a way to obtain one in Pokémon Battle Revolution, however. After defeating Mysterial, you can download a female Pikachu with the move Surf onto any Generation IV game by using the Mystery Gift section of the game's shop.