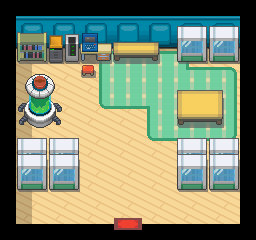 Professor Oak's Lab is a laboratory in Pallet Town where Professor Oak lives and studies Pokémon at. It is located in the Kanto region. Oak provides the player and Gary Oak with a Starter Pokémon here at the beginning of the Generation I games.

The laboratory debuted in the first episode, Pokémon - I Choose You!, when Ash received his Pikachu. Since then, it has been seen in many episodes, mostly in the start and ending of a region adventure, but also in Pokémon Chronicles and in the movies. The building stands out inPallet Town for its wind turbine, the three windows of the inner balcony, and for the four windows of the second floor. Every time Ash captures a Pokémon when he has six already with him, the new Pokémon is automatically transported here. Ash also has a habit of leaving all of his Pokémon besides Pikachu here each time he leaves for a new region, starting with Hoenn.

In the Games, the Lab is where Professor Oak is if you ever want to speak to him at all for any reason. He studies Pokémon all day in his lab and has two or three aides helping him at all times. There are many machines in the lab that look very high-tech, but you can not touch them. One of the Machines is a Pokédex, professor Oak gives that and five Poké Balls to the trainers that come and get one of the Starter Pokémon from him. The Pokémon are kept on a table in the top-right corner and you're allowed to choose any. After you beat the game, you can come here to get the National Pokédex from him.