In the game Pokémon FireRed and LeafGreen and in the game Pokémon Red and Blue, Professor Oak lives in Pallet Town and he is absent from his lab until you try to leave town, when he runs up to you and makes you come with him. He then lets you choose a Starter Pokémon. If you go to the mart, the store clerk will give you Oak's Parcel. The Parcel contains a prototype Poké Ball, bring it back to Oak and he will give a Pokédex to you along with 5 Poké Balls. He sends you on your journey and all throughout he helps you by sending his aides out to give you items if you capture the right amount of Pokémon. In Pokémon FireRed and LeafGreen, he helps you when your rival challenges you for the first time.

In Pokémon Yellow, when the player steps into the grass they will encounter a Pikachu, which Oak captures and gives to you after your rival takes the Eevee that was intended for the player.

In Pokémon Diamond and Pearl, after you see each Pokémon in your Sinnoh Pokédex, Professor Oak will come and hand you the National Pokédex. He resides in the most southerly house in Eterna.

In Pokémon HeartGold and SoulSilver after beating the Elite 4 for the first time you will be able to recieve the National Dex from him. Also after defeating all of the Johto and Kanto gym leaders he will give the trainer the HM08 Rockclimb.

In the Pokémon Adventures Manga

In the Manga
Just like in the games, he is highly regarded and known, he is the person who gives Pokédexes to the Pokédex Holders. His grandson is Blue. In Pokémon Electric Tale of Pikachu, his Charmeleon, named Char, evolved into Charizard. 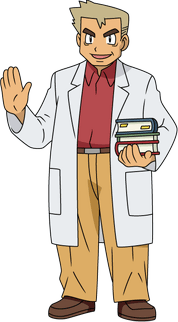 In Best Wishes
In the anime, Oak is most notable for his vast research facility, where he cares for and studies hundreds of Pokémon, including those owned by, but not currently traveling with, Trainers from Pallet Town. He has confidence in his grandson, Gary Oak, but more often joins Ash's mother and friends in cheering on Ash in his competitions.

In the novelizations written by Takeshi Shudō, Professor Oak comes from a prestigious family. He has two brothers, one is the mayor of Pallet Town and the other is the Post Master, and his grandfather was the first Trainer from Pallet Town to receive widespread recognition. According to Professor Elm, Professor Oak's studies and research mostly focus on how humans and Pokémon interact with each other.

He appears as a young boy, Sam (Japanese: ユキナリ Yukinari) in the fourth film, Celebi: Voice of the Forest. Ash befriends the young Oak, who, due to traveling from 40 years in the past, is around the same age as him. The revelation that Sam is Oak, while able to be speculated because Oak's first name was revealed in the second movie, The Power of One, comes only at the end of the movie, when Oak knows that Ash's friend's name was Sam despite Ash never telling him so, and Tracey finding the sketchbook in which young Sam drew Pikachu sleeping with Celebi in Oak's closet.

Oak lives up the road from Ash's mother and the two often appear together as they are very good friends. He currently lives with Tracey Sketchit, who became his loyal assistant in The Rivalry Revival. Tracey and Prof. Oak are very passionate about studying Pokémon and are both artists.

In the movie, Sam saw many Generation II Pokémon, notably the legendary Pokémon Celebi and Suicune, though his Pokédex only catalogs the Generation I Pokémon, claiming that they are all the Pokémon that the world knows, in the Kanto arc. This discrepancy is likely due to the retcon that occurred when the 100 new Pokémon were introduced to the series, and due to the ever-increasing number of Pokémon, with Pokémon from Generation II, Generation III, and Generation IV being able to be trained in Kanto during FireRed and LeafGreen and HeartGold and SoulSilver, this is likely the reason that the number of them as of the current generation of games is no longer mentioned in the anime.