Professor Birch (Japanese: オダマキ博士 Dr. Odamaki) is the Pokemon Professor of Hoenn. He is Brendan or May's father. He lives in Littleroot Town. In the anime, he is not related to May and entrusts Ash as May's bodyguard on her journey.

In Ruby and Sapphire, he is chased by a Poochyena and you have to choose either a Treecko, Torchic, or Mudkip and defeat the Poochyena, and he will allow you keep the Pokémon.

In Emerald , all of that is the same except Prof. Birch is chased by a Zigzagoon. After completing the Hoenn Dex, Prof. Birch will give the player a Chikorita, Cyndaquil, or a Totodile. 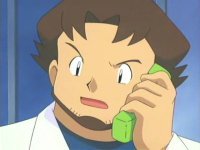 Birch was first mentioned in a flashback of Harrison on Johto Photo Finish. His first appearance was in Get The Show On The Road when he gave May her Torchic. He later appeared in Dewford Town in both A Three Team Scheme! and Seeing is Believing!. Birch also appeared in A Six Pack Attack, when he was meeting Professor Oak. Later, Birch was seen in The Evolutionary War! at a vacation on A-B-C Islands. Over there, he and the twerps cleared the mystery of the Clamperl evolution. Birch's most recent appearance was a short cameo in The Mastermind of Mirage Pokémon; it is unknown if he will appear again since the main characters have left the Hoenn region.

His preferred mode of transport is a jeep that he drives recklessly.

Due to the relationship between characters in the games, it is widely speculated that Birch is the father of Brendan's anime counterpart. This character has made three short cameo appearances in the anime and has the starter Pokémon whose type weakens May's. Birch is voiced by Dan Green.