From the Azurilland Wiki, a database for the Pokémon series that anyone can contribute to
Jump to: navigation, search
← Piplup | Prinplup | Empoleon →

Prinplup (Japanese: ポッタイシ Pottaishi) is the Water-type Starter Pokémon of the Sinnoh region, evolved from Piplup. Prinplup live by themselves in their own "colony", as each considers itself to be the most important. In the anime, it is owned by Kenny, Dawn's rival. It is known to have a very proud personality.

Prinplup is a penguin that is considerably larger than its pre-evolved form, Piplup. It has two large wings that are about half the length of Piplup. On Prinplup's head is a yellow crown that lies above the eyes. Prinplup's torso is a light blue with four white spots, two on each side. The feet of Prinplup are more webbed than Piplup's and are yellow. It's fins are tipped with light blue. It also has a dark blue tail in the shape of a fin. 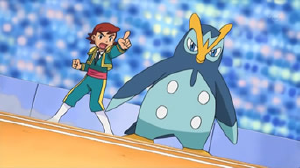 Kenny's Prinplup about to use an attack.

Prinplup, like all the other Water-type starters, has the ability Torrent. When Prinplup's HP is below 1/3, it's Water-type moves increase in strength. Hunting in icy waters, Prinplup's most effective weapons are its flippers, which are strong enough to snap a tree in two.

Prinplup is the evolved form of Piplup as of level 16. It evolves into Empoleon at level 36.