From the Azurilland Wiki, a database for the Pokémon series that anyone can contribute to
Jump to: navigation, search
← Mamoswine | Porygon-Z | Gallade →

Porygon-Z's appearance is similar to that of Porygon and Porygon2, though darker in color when compared to both of them. It has a very smooth appearance much like Porygon2. It's head is not attached to its body and is now upside-down with a slight tilt. It has a blue beak, and yellow eyes with a bull's eye target pattern in them. Its legs now appear to be more wing like, while its tail points downward rather than up. The spot of blue that was located on its chest now goes across the chest, connecting the two wings.

Porygon-Z have the abilities Adaptability or Download. Adaptability allows the power of a move, with the same type as it is, to be doubled in battle. The ability Download will raise either its Attack stat or Special Attack stat by one stage depending on foe's lowest defensive stat.

Aside from that, the programming added to create Porygon-Z was intended to allow it to upgrade into a better Pokémon, but as a result, Porygon-Z began to exhibit odd behaviors and the data used to program it became glitched giving it its odd appearance.

Porygon-Z is also notable for having the highest Special Attack, one of two statistics that influence the power of an attack, among non-legendary Pokémon. It shares this feature with another Pokémon, Alakazam. 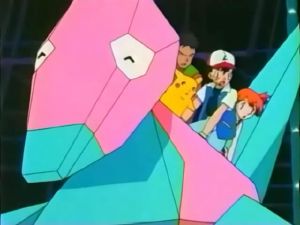 A scene with Porygon in the episode Electric Soldier Porygon

As is the case with every evolutionary form of Porygon, it is believed that Porygon-Z will never make an appearance in the Pokémon anime series. This is a result of the episode Electric Soldier Porygon, which induced seizures in many Japanese children in 1997. Because Porygon was the featured Pokémon in this episode, it has never been shown, along with its evolutionary forms, in any episode after the incident even though it was Pikachu's eyes that were flashing red. Technically, Porygon had nothing to do with the seizures.

Porygon-Z evolves from Porygon2. A Porygon2 can only evolve into a Porygon-Z when it is traded with a Dubious Disc.

Porygon-Z first appeared in the Generation IV games. It is only obtainable through a trade. During a trade, a Porygon2 must be carrying a Dubious Disc with it, this is what triggers its trade evolution.