Pokéstar Studios is an area in southwestern Unova situated above Virbank City whose function as a movie studio replaces the Pokémon Musical function of Black and White in Pokémon Black 2 and White 2, allowing the player to choose a script and enact various scenes to create a movie. Roxie's father and Brycen have starred in numerous films created in the Pokéstar Studios.

In battle, the player will get a variety of script options to follow and these options will determine the course of the movie. Once the script is run through, the movie is complete and the player can watch the result. 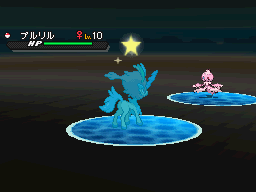 After you've completed a movie, you have the ability to enter the movies with your own Pokémon. However, if you deviate from the script and say things out of character but ultimately don't fail the mission, then you will get the "Strange" ending of the movies. An example would be defeating Brycenman's Pokémon within the "Brycenman Strikes Back" movie.

If you successfully accomplish this, your Pokémon will have a special intro animation that will show a star bouncing upwards as the Pokémon enters battle.