From the Azurilland Wiki, a database for the Pokémon series that anyone can contribute to
(Redirected from Pokémon the Movie 2000: The Power of One)
Jump to: navigation, search
← MS001: Pokémon The First Movie - Mewtwo Strikes Back | Pokémon Movies | MS003: Pokémon The Movie 3 - The Spell of the Unown →

This is the only Pokémon movie to date that does not include one of the main characters, Brock, who temporarily left during the season on which the movie is based. However, he does make a cameo appearance in the movie trying to protect the Pokémon in Professor Ivy's lab.

It was released in movie theaters Japan on July 17, 1999. The English version, produced by 4Kids Entertainment and distributed by Warner Bros. (on behalf of Kids' WB) in association with Nintendo Co. Ltd., was later released in the United States on July 21, 2000.

The movie earned less at the box office than its predecessor, Pokémon: The First Movie, despite increased promotion and better critical reception, which made up for this minor loss.

Pokémon: The Movie 2000 has two parts: the feature presentation and a 20-minute short.

In the United States, this film was rated G by the MPAA.

The Power of One[edit | edit source]

Disturb not the harmony of Fire, Ice, or Lightning,

Lest these Titans wreak destruction upon the world in which they clash.

Though the water's Great Guardian shall arise to quell the fighting,

Alone its song will fail.

Thus the Earth shall turn to ash.

O, Chosen One, into thine hands bring together all three.

Their treasures combined, tame the beast of the sea.

From the trio of islands, ancient spheres shall you take, For between life and death, o the diff'rence you'll make.

Climb to the shrine to right what is wrong,

And the world will be healed by the Guardian's song.

This is an introduction to the three legendary birds Articuno, Zapdos, and Moltres, around which the plot revolves, introducing the theme of a delicate balance between the forces of nature (a common theme throughout the Pokémon series), embodied by the very Pokémon who represent them. Should the balance of power between these three birds be destroyed, chaos would ensue, prompting the "Great Guardian" Lugia to rise from the depths of the sea to attempt to end the senseless destruction, yet only with the help of a "Chosen One" destined to save the world.

A Pokémon Collector, Lawrence III, wishes to capture the three legendary birds and follow the legend's tale. This is all part of his plan to capture the Beast of the Sea, Lugia. Using a futuristic aircraft, he captures Moltres from Fire Island. As predicted, the world's climate and weather begin to go awry, alerting the attention of many Pokémon and humans, including Professor Oak. Along with Professor Ivy - who leaves

Brock in charge of her Pokémon - and Delia Ketchum, he travels out to the Orange Islands in a helicopter.

Out in the Orange Islands, Ash Ketchum, Misty, Tracey are on a boat piloted by Maren. It's a sunny day. They decide to let all their Pokémon out. What they don't know is that Team Rocket is following them, but don't worry. Later, a storm heats up, striking both ships and Maren's boat is washed ashore onto Shamouti Island, the centerpiece of the Orange Islands while Team Rocket's crashes into a rock. The weather is bad back in Pallet Town, too, because Pidgeys and a bunch of Diglett run towards the Orange Islands, along with Professor Oak and Delia Ketchum. Back on Shamouti Island, Ash, Misty and Tracey are welcomed by the festive islanders

Melody with Ash, Misty, and Pikachu at the festival.

who are celebrating the legend. One woman, Carol, is old friends with Maren and was the former Festival Maiden. Now the role has now been passed down to her younger sister, Melody, who takes a liking to Ash. Ash is declared the Chosen One for the festival (allegedly, this happens annually to the first Pokémon Trainer to arrive) and is given the task of traveling to the islands of the birds and collecting three glass balls that represent the elements, before bringing them back to the island's shrine where Melody will play a song on a special instrument to end the task. Pikachu, who is rather edgy, heads out to Fire Island, Ash and Maren following.

They get caught in the seastorm again and crash on Fire Island. Ash and Pikachu locate the fire-based sphere; almost immediately, Team Rocket show up to cause trouble. Misty, Tracey and Melody appear unexpectedly in Melody's aerodynamic boat, Melody feeling responsible for sending Ash off. However, Zapdos suddenly appears and after communicating with Pikachu through lightning claiming the island as its own, it is captured by Lawrence III. Ash, his friends and Team Rocket are all accidentally captured too. Inside, they free Moltres and Zapdos but the two birds end up fighting each other and cause the aircraft to crash-land on Lightning Island. Ash grabs the lightning-based sphere during the escape from the birds. The group escape in Melody's boat, and it is carried to Shamouti by a typhoon, which is revealed to be Lugia. Slowking, guardian of the Shamouti shrine, instructs Ash to place the spheres into the shrine.

Ash is then instructed by Lugia to go to Ice Island to retrieve Articuno's sphere, and is surprisingly revealed to 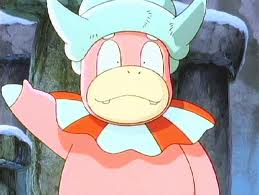 Slowking at the shrine

be the actual Chosen One as foretold in the legend, reluctantly accepting his destiny as he attempts the final task. Bulbasaur, Squirtle and Charizard try to help Ash get across the frozen ocean, but the legendary birds thwart their attempts. Team Rocket race in on a speedboat made from a dingh

y and a motor salvaged from Professor Oak's crashed helicopter. Ash, Pikachu and Team Rocket race through Ice Island's undergrowth to the shrine where they collect the last sphere. The legendary birds fight again, and Articuno is knocked unconscious.

Ash, Pikachu and Team Rocket escape on Lugia but the extra weight is slowing Lugia down, so Team Rocket nobly sacrifice themselves (by jumping off his back) to "save the world". Lawrence III then reappears and attempts to capture Lugia, but the legendary bird uses an extremely powerful attack to thwart him,

but this weakens Lugia, who ends up tumbling into the ocean, defeated. Misty swims out into the ocean to save Ash and Pikachu, bringing them back to shore.

Ash, Pikachu, Misty and Tracey head up to the shrine where Ash places the last sphere. Melody plays the song, reviving Lugia from the depths as well as the legendary birds. The weather clears up and Lugia offers Ash and Pikachu a ride in the sky. A giant underwater current rises from the ocean like a sea dragon and follows Lugia around, tamed by the bird. The current goes back into the sea and the legendary birds deport to their islands, shortly following which Professors Oak and Ivy, along with 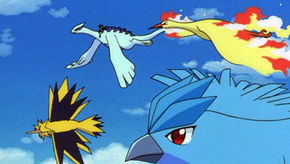 Delia Ketchum, arrive and congratulate Ash and his friends.

Some time later, Team Rocket, having survived the fall into the ocean, make it back to Shamouti, whereupon Slowking says that they are not unsung heroes; he reveals that the audience knows they helped to save the world.

Donna Summer sings the ending song of the movie, also titled “The Power of One”. “Weird Al” Yankovic also provided an original song, “Polkamon”, which played during the ending credits. The last song played during the credits was “Flying Without Wings” by Westlife. Italian singer Laura Pausini sings the ballad The extra mile, written, among others, by Australian singer Tina Arena. The B-52's also recorded the song "The Chosen One" just for the movie.[1]

There are many Pokémon in the movie, though most only have cameo appearances. These are the most notable:

When Pokémon: The Movie 2000 was released, select movie theaters would dispense exclusive cards. The first week, the card was a replica of the Ancient Mew card that featured in the movie. The consecutive weeks were random between the legendary birds. (In Japan, one of the promotional cards was a special edition of Slowking/Yadoking as drawn by the voice actor who portrayed him, famed comedian - and infamously bad artist - Masatoshi Hamada.)

During the Japanese release, the first run of Ancient Mew had ‘Nintendo’ spelled as ‘Nintedo’. This was corrected for future runs (and the US release) of the card.

Pokémon The Movie 2000 was poorly received upon its release, it has a 16% "rotten" rating at Rotten Tomatoes and at Metacritic it has a 28 out of 100 stating: Generally unfavorable reviews.

The soundtrack was released alongside the film in 2000 by Atlantic Records and includes many songs by popular artists, such as "Weird Al" Yankovic and The B-52's. The orchestral score to the film was also released on a separate CD, Pokémon The Movie 2000 Original Motion Picture Score, but this CD still features "The Legend Comes to Life", which was the final song played by Melody.

The title track to the movie was remixed by Jonathan Peters and Tommy Musto. Pokémon The Movie 2000 Original Motion Picture Score is the orchestral soundtrack to the movie. The CD was originally released in some countries in Europe (the United Kingdom not included) in 2000. It wasn't until 2004 that American fans got their chance to own the music, when it became available for download on iTunes.