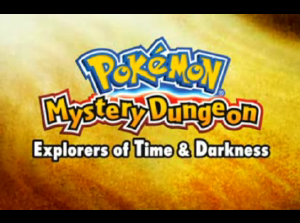 This Special Episode is based from the actual Pokémon Mystery Dungeon Explorers of Darkness/Time game for the DS. This show was aired in Japan on September 9, 2007, then dubbed for English and aired on September 8, 2008, on Cartoon Network. This episode follows the plot of the game. The bad news is that this is a one part episode and cannot continue as a series.

This episodes starts off with Grovyle stealing a Time Gear. Once he starts to leave, time is halted. The scene shifts to a scared Chimchar waiting at the doors of the famous Wigglytuff Guild. As he is waiting, Chimchar notices another team that's got blown away by Wigglytuff(Yoom-Tah!) Then a Diglett analyzes his footprints and announces that it is a Chimchar. He then gets spooked and runs away to the beach. While Chimchar is at the beach, he notices a Piplup lying on the ground. He wakes up Piplup, and then learns that Piplup was a human and couldn't remeber anything. Chimchar convinces Piplup to join his exploration team, hoping that Wigglytuff will help Piplup find his past. Then the Pokémon at the Guild starts to wonder if Piplup turning into a Pokémon had anything to do with the Time Gears. As they duo were sleeping that night, Piplup gets a vision (the dimensional scream) about what they were going to buy from the Kecleon Brothers. The next day, Team Poképals (Chimchar & Piplup) recieves their first mission. Their mission was to retrieve a Gabite Scale from the Gabite in Labyrinth Cave with Sunflora going with them. Before leaving to Labyrinth Cave, they went to stock up on items from the Kecleon Brothers, as it says this was the vision Piplup had last night. As they are in Labyrinth Cave, Piplup gets a vision about a stone bridge collapsing. Chimchar almost goes on the stone bridge until Piplup stops him. Chimchar was grateful about what Piplup did. As they continue, they then encounter with the angry Gabite. He says that if the team beat him in a battle he'll give them the Gabite Scale. It was a ferocious battle between Team Poképals and Gabite. In the beginning, Piplup and Chimchar were struggling when Gabite used Dragon Claw a lot. Then, Sunflora comes to the rescue using Razor Leaf with the Power Band she bought for herself increased its attack. Sunflora is about to use Petal Dance until Gabite uses Attract on her. Sunflora then becomes in love with the Gabite and can not continue battling. Piplup uses Peck seeing that Sunflora can't battle. As the move failed, Chimchar came and then used Fury Swipes. As Chimchar was busy using Fury Swipes, Piplup decided to use Bubble. When he used Bubble it turned out to be Bubblebeam, as Piplup gained experience from the Joy Ribbon. Gabite is knocked out, then gets up and gives the team the Gabite Scale. Gabite was grateful for an exciting battle with them. Once they get back, the team gives the Gabite Scale to the Shinx and got a Luxray Fang as their reward. Then Chatot comes swooping down and takes the Luxray Fang, stating that all rewards go to Wigglytuff. They Pokémon at the Guild receives another bad news. Another Time Gear was stolen by Grovyle! Piplup then wants to join the team hoping that it will help his memory return and find out about his past as a human.