From the Azurilland Wiki, a database for the Pokémon series that anyone can contribute to
(Redirected from Pokémon Mystery Dungeon: Explorers of Time & Explorers of Darkness)
Jump to: navigation, search

The basic controls retain from the previous Pokémon Mystery Dungeon games. There are a variety of new features introduced in this game, such as the ability to obtain and hatch eggs received as rewards from missions. The game features a total of 491 Pokémon to recruit, excluding Shaymin and Arceus.

The games utilize the dual screen of the Nintendo DS. The top screen is generally used to showcase team stats, game controls, or the map of a dungeon. The bottom screen allows the player to do various mechanics with the use of the stylus, such as moving the player and going through menus and settings. It also showcases the map in clear or shaded form, if it is turned on in the options menu.

The game begins with an image of a stormy sea, in which two characters are shouting to one another. However, presumably, one of the characters was unable to "hold on," and the screen fades to white.

The scene will then move to a beach, where the main character lies unconscious on its shore. Meanwhile, the partner Pokémon attempts to enter the Wigglytuff Guild, only to become frightened by the sentry system and flees before the door could be opened. A Zubat and Koffing appear hiding behind a rock near the door and goes after the partner Pokémon. 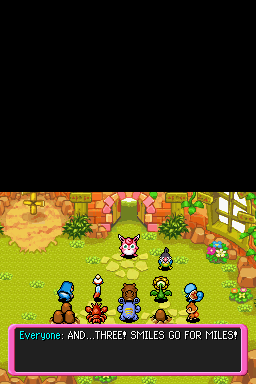 Unable to find courage to enter Wigglytuff Guild, the partner Pokémon strolls on the beach, amazed with the scenery. Soon, he or she then finds you passed out on the beach, with only a memory of being human and your name. However, your partner thinks you are lying about once being human, but then asks you your name. Then, Zubat and Koffing come along and steal your partner's Relic Fragment, and the twosome run into Beach Cave. You decide to help your partner out, and you and your partner dash into the cave. At the deepest part, you find Koffing and Zubat, looking at the fragment. They battle you, and when you defeat them, they drop the Relic Fragment and run away. When you arrive back on the beach, your partner asks to form an Exploration Team with you. You accept, and then he or she explains about becoming a Exploration Team at Wigglytuff's Guild. With the help of your presence, your partner finds the courage to enter the Guild.

In the Guild there are many other Pokémon, Wigglytuff is the Guildmaster, Chatot his right hand Pokémon, Diglett the Guild sentry, Loudred who helps Diglett with the Sentry Duty and wakes you up in the morning. Sunflora, Corphish, Chimecho and Bidoof are the other guild members.

Once you join the Guild, your days training as an Exploration Team could involve completing jobs on the Jobs Board or the Outlaw Board, going on explorations with the rest of the guild, performing story line jobs or completing sentry duty when Diglett has other jobs to do. 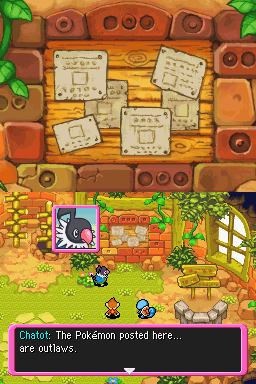 Chatot explains the Outlaw Board.

You and your partner then face many challenges through the game and face Outlaw Pokemon including Froslass, Drowzee and Luxray. These would be similar to the "punish Bad mankey!" mission from Mystery Dungeon: Red Rescue Team And Blue Rescue Team Rescue Team. Eventually you will have to face Primal Dialga then later, Palkia.

Along the way, you find out how you came to be a Pokémon and the purpose you had to serve to save the world from paralysis. The game can be played further to recruit all pokemon, complete the conquest of all dungeons in the game.