MS004: Pokémon 4Ever - Celebi: Voice of the Forest

From the Azurilland Wiki, a database for the Pokémon series that anyone can contribute to
(Redirected from Pokémon 4Ever)
Jump to: navigation, search
← MS003: Pokémon The Movie 3 - The Spell of the Unown | Pokémon Movies | MS005: Pokémon - Heroes: Latios and Latias →

Pokémon 4Ever (劇場版ポケットモンスター セレビィ 時を越えた遭遇, Gekijōban Poketto Monsutā Serebii Toki o Koeta Deai?, lit. "Pocket Monsters the Movie: Celebi: The Meeting that Traversed Time"; officially POCKET MONSTERS CELEBI A TIMELESS ENCOUNTER in Japan) is the fourth official Pokémon movie. It was the first one to be distributed by Miramax Films and fourth Pokémon film to be released in wide theaters outside of Japan in 2002. The original Japanese version was released in theaters on July 7, 2001, and the English adaptation saw limited theatrical release on October 11, 2002.

Although Kids' WB! currently airs the film, it aired on CBS on May 21, 2007 (due to the fact that Paramount released the film), being the third Pokémon film to air on CBS (the first two being the next films Pokémon: Jirachi Wishmaker and Pokémon: Destiny Deoxys).

The film focuses on Celebi who travels to the future and brings with a boy named Sam when being chased by a hunter. Meanwhile Ash, Misty, Brock, and Pikachu are on their way to the next gym in their Johto journey and get a lift from a man named Maki who takes them to his hometown of Arborville. They see a Suicune (who was actually the first Pokémon Ash saw in Johto). When they plan to enter a forest that is claimed to have many unusual and rare Pokémon, they are warned by an elderly lady about the "Voice of the Forest" which may carry a person off to a different period in time unless those hearing it stand still.

Ash finds Sam alone in the forest as Celebi has fled. Sam awakens and discovers he is 40 years in the future 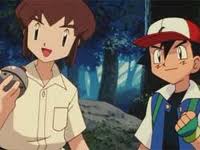 The heroes take Celebi to its home, the Lake of Life, where it is healed by the water. The group spend the night in the forest. The next day, Celebi is captured by the Iron Masked Marauder and is turned evil by the Dark Ball, a ball with special powers that will enhance the captured Pokémon's powers and turn it evil. The Iron Masked Marauder orders Celebi create a giant dragon shape made from parts of the forest. The heroes chase after Celebi in Maki's flying boat, but are brought down by the evil Celebi's attacks. The Iron Masked Marauder tries to kill Ash and Sam, but Suicune saves them. Onix and Suicune do battle with the Masked Marauder's evil Tyranitar, while Ash, Sam, and Pikachu clamber into the dragon shape and manage to get Celebi to remember its memories, successfully bringing Celebi back to normal.

Celebi prepares to bring Sam back in time. He has an emotional farewell with Ash and departs with Celebi. The movie ends with Ash and company talking to Prefessor Oak, who muses about the story and tells a confused Ash that he and Sam are going to be friends forever.

The credits end with Tracey clearing Oak's room and finds Sam's drawing pad, containing a faded sketch of Pikachu and Celebi. The reason being that Sam was actually a young version of Professor Oak, whose first name is Samuel.

The film was a box-office bomb, it received poor reviews from critics and fans. On Rotten Tomatoes it has a "rotten" rating of 14% based on 37 reviews and at Metacritic it has a 25 out of 100 based on 16 reviews and stating: Generally unfavorable reviews.