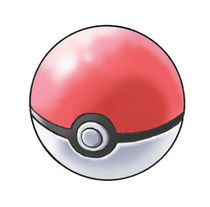 The Poké Ball is a spherical device used by Pokémon Trainers to "catch" and store Pokémon in the fictional video game series Pokémon. Many varieties of Poké Balls exist; the regular Poké Ball which is simply called a Poké Ball, The Great Ball, the Ultra Ball, the Master Ball, the Safari Ball, the Park Ball, and many other types of Poké Balls are specially designed by Kurt.

A regular Poké Ball features a red top, white bottom, and a black ring going around the center horizontally. In the middle of the Poké Ball, there is a small, silver button which can be pushed to release or call back a Pokémon. The Poké Ball is designed to be portable, so when the Poké Ball is palm sized and when the silver button is pushed, it will grow to full size. In the Pokémon games, it is not possible to carry a Pokémon which is not in its Poké Ball, with the exception of Pokémon Yellow, which allowed a Pikachu to follow the player, in the Sinnoh region games where a limited amount of Pokémon species could follow the player inside Amity Square and HeartGold and SoulSilver, which allowed the first Pokémon in the party to follow the player.

Although the exact dimensions of the Poké Ball are not known, it's probably around 4-6 centimeters in diameter, although, according to the anime, the button on the center of the Poké Ball can also be pushed to shrink so it is small enough to attach to a belt. This was later reaffirmed in the story mode of Super Smash Bros. Brawl, where the Pokémon Trainer character uses the silver button to cause the ball to grow from the size of a billiard ball to a dodgeball.

File:All pokeballs.png
All Poké Balls that can be obtained in-game (Ball 13 is the bug catching contest ball)

To use a Poké Ball to "catch" a wild Pokémon, a Pokémon trainer will simply throw an unoccupied Poké Ball at the wild Pokémon. The wild Pokémon will then be absorbed into the ball, and will attempt to break free unless it likes the trainer. If the Pokémon has not been weakened enough during the time of catching, it may be able to break free of the Poké Ball (only during the first few moments of its catching, while it's still struggling), which is a good reason to use a stronger Poké Ball over the regular Poké Ball, such as a Great Ball, which is 50% stronger than a regular ball. If the Pokémon does manage to break free, the Poké Ball used to attempt to catch it will break and is no longer usable (in the anime, Poké Balls can be reused after a failed capture attempt). Poké Balls can not be used to catch already caught Pokémon (Pokémon belonging to other trainers). It is also programmed not to catch humans. If the red beam hits something other than a Pokémon, (i.e. the rice cake Ash caught in Primeape Goes Bananas) it may, or may not capture it.

Once a Pokémon has been successfully caught in a Poké Ball, it will become loyal to its catcher and will usually obey them. For this reason, a Pokémon can not generally be considered "evil" — a Pokémon is only as evil as the trainer who caught it, however Pokémon can also act evil on their own. It is not known what a Pokémon does whilst inside their Poké Ball. The inside of a Poké Ball is "designed to be as comfortable for the Pokémon residing within", although this is not necessarily true. The Pokémon inside may simply be sleeping, or completely unaware of its own existence. Pokémon are, however, aware when inside their Poké Ball — by calling their name, the Pokémon will emerge from its Poké Ball almost immediately.

Rarely even, a Pokémon will release itself from the Poké Ball. In one episode of the anime, which should not be taken seriously, the inside of a Psyduck's Poké Ball is shown — it simply appears as an empty space consisting of mirrors and circuitry. To release or recall a Pokémon, trainers either say the Pokémon's name ("call it") or push the small button on the Poké Ball. The naming command is usually accompanied with a phrase — such as Go, Eevee or Return, Bulbasaur!. A Poké Ball can only store one Pokémon at a time. For this reason, a trainer may carry as many as six occupied Poké Balls at once — although they may carry up to 999 spare Poké Balls for catching more Pokémon. If more than six Pokémon are caught, the additional ones will be transferred to a PC.

Due to the Poké Ball's small size, it is hard to imagine how large Pokémon, such as Wailord, or even smaller Pokémon such as Natu manage to fit inside the Poké Ball. Although this has never been made clear officially, when a Pokémon is absorbed into a Poké Ball, their form "shrinks" and turns into energy. It is possible that the Pokémon are simply stored as energy in their Poké Balls, although this, of course, arouses many other questions, such as how they can return to a tangible form.

According to the movie Destiny Deoxys, Poké Balls need exterior energy in order to call or re-call the Pokémon that belongs to that Poké Ball.

Also, in Hypno's Naptime, it shows Misty's Psyduck in a gray, round, unroomy looking chamber which is in the Poké Ball.

Other Types Of Poké Balls

These include the types of Poké Balls that have appeared in the anime, manga & games.

In the anime, Professor Ivy was the first character to possess the GS Ball. She intended to called upon the help of Professor Oak to study it, but she couldn't figure out how to open it or transmit it via PC. Professor Oak asked Ash to go to the Orange Archipelago and get it from Professor Ivy, which he did in Poké Ball Peril. This prompted Ash's participation in the Orange League.

At one point, Ash tried simply calling a Pokémon to be released but this did not work. When Professor Oak couldn't do anything with it, Ash was asked to deliver it to Kurt, a Poké Ball researcher and manufacturer living in Johto's Azalea Town. It presumably still resides there to this day and its purpose was, at the time, unknown.

In an interview with Masamitsu Hidaka in 2008 by the webmaster of PokéBeach, it was explained that the GS Ball was meant to contain a Celebi that was to be the star of a large arc of the Johto saga. However, it was decided that Celebi would be the star of the fourth movie, so the story arc was viewed as redundant and shelved. The ball was left with Kurt with the hopes that viewers would eventually forget about it. The GS might stand for Gold and Silver.

These Poké Balls look like a black and gray ball with a gold strip and a ruby eye in place of the white button. These can capture other Trainer's Pokémon and even those inside their Poké Balls by capturing the actual Poké Ball as well. This ball only appeared in "Pokémon The First Movie".

Only used by Vicious The Iron Masked Marauder, it is black all over with a gray strip, a dark gray button and many dents all over. Any Pokémon caught with this ball become unswervingly loyal to Vicious to the point there they will attack and possibly kill their friends and family. It instantly raises any Pokémon to the highest level. The Dark Ball also installs them with a sinister personality to fit. Vicious used this ball to capture Celebi with his Scizor, Sneasel, and his newly stolen Tyranitar.

This ball was used by a young Professor Samuel Oak, Sammy, and is not available in the games. This ball made its only appearance in "Pokémon 4Ever". It is a murky brown color and is possibly a pre-modern-day Poké Ball. The user had to turn a small dial like those on safes just to get it to work. It was only seen sending out a Pokémon (Sammy's Charmeleon), never catching Pokémon.

The Custom Poké Ball is the item contained in Oak's Parcel in Pokémon FireRed and LeafGreen. It is unknown what its appearance or function is.