From the Azurilland Wiki, a database for the Pokémon series that anyone can contribute to
(Redirected from PokéGear)
Jump to: navigation, search 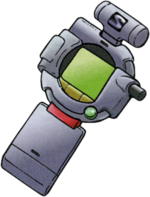 An old model of the PokéGear

The Pokémon Gear (commonly referred to as the PokéGear) is a key item available in the Pokémon games set in Johto. It acts as a phone, map, and a radio after receiving a card to activate the function. After defeating the Elite Four, the player can tune into special radio channels, called Sounds, that will lure Pokémon from other regions to the immediate area. A Hoenn counter part is called the PokeNav. Used in the same fashion and obtained towards the beginning of the game, it can match calls and check your map.

You can also get Gym leader numbers, but you must get them when they are away from their gyms (Except Chuck and Blue).

The PokéGear has several uses; you can use it as a map, a radio, a clock, and as phone.

The PokéGear functions as a clock; it will tell you the time and day.

Shortly after the game begins, the player obtains a map card. After the player acquires this, the PokéGear can be used as a map.

The PokéGear also can be used as a phone to call trainers and Gym Leaders to request rematches, as well as to call other NPCs such as the player's Mom. These NPCs will, on occasion, call the player.

Another use of this device is the radio. The player can listen to several different programs; their content often depends on the time of day as well as on the day of the week. These programs can enable the player to obtain things like Buena's Password; there is also a program that, when listened to, will allow the player to encounter Hoenn and Sinnoh Pokémon.