Platinum or Platina is a Pokedex Holder in the Pokémon Adventures Manga. Her Pokémon are Empoleon, Rapidash, Lopunny, Froslass, Cherrim and Pachirisu. At the beginning, Dia and Pearl thought she was their tour guide, with Dia taking an early interest in her and Pearl getting a little annoyed and perplexed regarding her attitude. 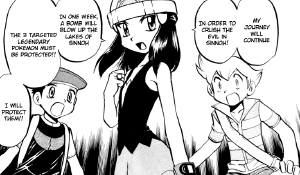 Just like most characters in the manga they are based off the playable characters. Platinum is based on the female character of Pokémon Platinum, Pokémon Diamond, and Pokémon Pearl; Dawn or Hikari. 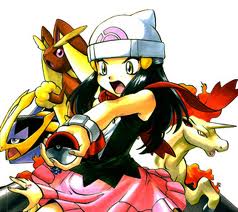 She didn't know that Dia and Pearl weren't her bodyguards and she thought about it when she learned the truth but she still kept the two of them because of their friendship. She is being taught by Diamond and Pearl how to battle.

Whenever she is battling a Gym Leader, Diamond and Pearl give her some tips. She met Cynthia while training for her battle with Gardenia. At late chapters, she swears to defeat Team Galactic's plans and forgiving Dia and Pearl for lying