Pikachu's Rescue Adventure (Japanese: ピカチュウたんけんたい The Pikachu Expedition) is the 2nd Pikachu short. It comes with the movie The Power of One. 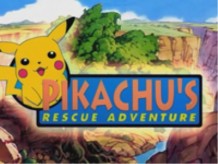 As with before, the faces of the main human characters are unseen. When Togepi falls down a dark hole, Pikachu, Bulbasaur, Squirtle, Marill, Venonat, and Psyduck give chase and find themselves in a giant tree that once was Pikachu’s old home. With help from Pikachu’s friend, Elekid, the Pokémon find Togepi but she has been mistaken for an Exeggcute egg. The Pokémon head off into the depths of the tree to find the missing egg, meeting a trio of dancing Bellossom along the way. A deadly storm hits the area and Pikachu and his friends try to protect the Exeggcute eggs from being blown away by using natural attacks, such as Thunderbolt and Water Gun. The tree Pakémon lend a hand and Snorlax saves everyone with his great strength. The storm fades when a Dragonair appears and calms the storm and a Chansey appears, revealing she had the missing egg all along. The eggs are reunited. Exeggcute suddenly evolves into Exeggutor with the assistance of a Leaf Stone. Pikachu and his friends say farewell to Elekid and the others and head back to their trainers. Meanwhile, Meowth tries to find his way to a campsite but ends up getting caught on Pikachu’s mishaps and gives up.