From the Azurilland Wiki, a database for the Pokémon series that anyone can contribute to
Jump to: navigation, search
← Arbok | Pikachu | Raichu →

Pikachu (pronunciation: PEE-kuh-choo) is an Electric-type Mouse Pokémon introduced in Generation I. It is the evolved form of Pichu after maximum happiness is reached, and subsequently evolves into Raichu when a Thunderstone is used. Pikachu has grown to become the mascot of the Pokémon franchise, mostly due to one being the anime protagonist Ash's closest companion. Pikachu was the version mascot for Pokémon Yellow.

Pikachu are small, chubby rodents that are covered almost completely by yellow fur. They have long yellow ears that are tipped with black. A Pikachu's back has two brown stripes, and its large tail is notable for being shaped like a lightning bolt. On their cheeks are two circle-shaped red pouches used for storing electricity, which turn yellow and spark with electricity when an Electric attack is about to be used

A female Pikachu looks nearly identical to a male, with the exception of its tail. A female Pikachu's tail is rounded at the end and has an inward dent, giving it the appearance of a heart. This, however, is only true in the Nintendo games. In the anime and in previous games, female and male Pikachus look identical.

Pikachu's special ability is Static, which can cause paralysis in battle if hit by a physical move. In Pokémon Black and White's Dream World, the Trainer receives a Pikachu with the Lightningrod ability.

Pika and Chuchu in the Pokémon Adventures manga

Pikachu is the main character in the game PokéPark Wii: Pikachu's Adventure 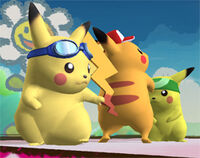 Each of Pikachu's alternate forms in Brawl can be seen as a tribute to different Pokémon games; The blue goggles come from Pokémon Colosseum and the red hat comes from the Kanto region games while the green headband comes from Pokémon Emerald.

Along with Mario, Link, and Kirby, Pikachu is a mascot for the Super Smash Bros. series.