From the Azurilland Wiki, a database for the Pokémon series that anyone can contribute to
Jump to: navigation, search
← Pidgeotto | Pidgeot | Rattata →

Pidgeot (pronunciation: PID-jee-ot) is a Normal/Flying-type Pokémon introduced in Generation I. It is the evolved form of Pidgeotto and the final evolution form of Pidgey.

Pidgeot resembles a large, feathery bird with huge wings. It has brightly colored feathers on its body and head like the shape of a flare of fire. Pidgeot starts the formation of seeing the difference between Pidgey and Pidgeotto.

Interestingly, despite the fact its official height is only slightly higher than 4 feet, in the anime Pidgeot is almost always depicted as larger than the average human being. It is also easily confused with Pidgeotto, because the only difference without a relative size comparison is that Pigeot's tail and head hair coloring switch from those of Pidgeotto's.

Pidgeot is a powerful flier, capable of creating whirlwinds strong enough to bend trees. At maximum velocity, it can reach speeds of Mach 2 (around 1522.2 mph). Pidgeot can also fly faster than Staraptor if it wanted to. With its powerful claws and strength, it can pick up almost any foe.

Pidgeot evolves from Pidgeotto at Level 36, and is the final evolution of Pidgey. 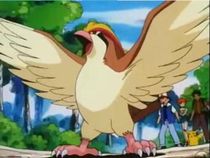 Ashs Pidgeotto evolved into a Pidgeot in Pallet Party Panic, and was released at the end of the episode. Ash remembers it in "Fighting Flyer with Fire!". Officer Jenny owned one in "Hoenn Alone!". Falkner's Pidgeot is seen in "Fighting Flyer with Fire!". Mewtwo has a cloned Pidgeot that is seen in Mewtwo strikes back and Mewtwo Returns. Corey's Pidgeot is seen in Mewtwo Strikes Back. He uses this Pokémon to get to the island. And Mewtwo steals and clones it.. Sir Aaron's Pidgeot is seen in Lucario & the Mystery of Mew. There have been few episodes where other people own a Pidgeot (about 5) and one of them was Perry Panic, when Pidgeot was unknowingly seen in the right corner of the movie.

It is based on some kind of bird. Its shiny form is possibly a Golden Eagle.