From the Azurilland Wiki, a database for the Pokémon series that anyone can contribute to
Jump to: navigation, search
← Cresselia | Phione | Manaphy →

Phione (Japanese: フィオネ Fione) is a Water-type Mythical Pokémon introduced in Generation IV that is only obtainable by breeding Manaphy or another Phione with a Ditto.

Phione lives in warm seas. It has a flotation sac on its head which it inflates to drift just beneath the surface and search for food; for this reason it is called the Sea Drifter Pokémon. It is 1'04" tall and weighs 6.8 lbs. It has the Hydration ability; any Status effects it has sustained are healed when it is raining. Its moves may include Aqua Ring, Dive, Surf, and Rain Dance. It is a Pokémon that is bred from Manaphy and Ditto making it a crossbreed but can't evolve into Manaphy. It is based on a sea fairy like Manaphy. Its Main Body Color Is Blue. there is one other way to get a phione but it requires Pokémon Ranch for the wii, a DS system, and Pokémon pearl,diamond, or platinum. If you don't get on Pokémon ranch for about one month and come back, there will be a phione found by the owner of the ranch, and will offer it if you have a leafeon, or glaceon, it really doesn't matter. If you trade in your leafeon/glaceon, you will be offered the Phione at level 50, with Surf, Rain Dance, and Grass knot. [citation needed] 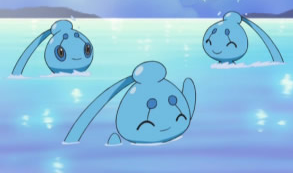 Phione does not evolve.

In Explorers of Time and Darkness[edit | edit source]

A swarm of Phione are having a humongous amount of fun in the depths of Miracle Sea. Unfortunately, a Gyarados scares them as you approach. When you defeat him (which will be a nasty opportunity if you are a pure Fighting type like Riolu.) a Phione rewards you with Phione Dew and you clear the dungeon. On your second visit, one of the Phione will walk up to you and request you to let it to join your team.