Petalburg City is located in the southwest of Hoenn, west from Oldale Town, where the player meets his second rival, Wally. To the north of the city is the Petalburg Woods.

The Gym Leader of Petalburg City is the protagonist's father, Norman, who uses Normal-type Pokémon. The player may only battle Norman after collecting the first four gym badges in Hoenn.

In the anime, Norman is the father of May and Max. His family lives in Petalburg City.

Here is the list of items sold in the Poké Mart in Petalburg City. 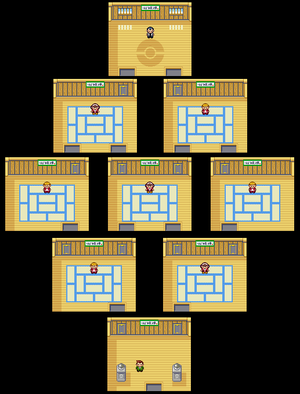 Norman is the 5th Gym leader in Hoenn that uses Normal-type Pokémon. It is recommended to use Fighting-type moves to tackle his Pokémon. You can only battle him after you get four badges. The Petalburg Gym is set up as a series of rooms. Each room contains a Trainer who specializes in a way of battling. A sign of each door explains what kind of tactics to expect from the Trainer just beyond.

You need to battle at least three trainers to reach Norman, but it is recommended that you battle all to train your Pokémon. Norman has a team of strong Normal-type Pokémon.

After you defeated Norman, you will receive the Balance Badge. This badges increases your Pokémon's Defense and allows you to use HM03 Surf on the field. He also gives you TM42 Facade.

You can't access Route 104, unless you visit the Petalburg City Pokémon Gym and help out Wally to catch his own Pokémon. After you have done that, you can then access to Route 104.

(Pokémon Emerald only) Before you walk out to Route 104, you will see a man in glasses walking to you and then talk to you. Then he walks off. He is Scott, the owner of the Battle Frontier. If you have completed the game, he will acknowledge you and allow you to participate the Battle Frontier challenge.

Your father owns the Petalburg Gym and be sure to visit it. Your father will not battle you unless you own four badges. He then offers you a word of encouragement and sends you on your way. So come back to him when you acquired four Gym badges.

Wally is somebody you encounter throughout your adventures in Hoenn. Wally is about to go to Verdanturf Town, but your father thinks he should have a Pokémon to keep him company. Accompany Wally to Route 102 to catch his first Pokémon, Ralts. After catching it, he will thank you and gone off to his destination. 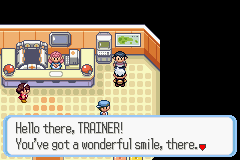 Visit the Pokémon Center and meet the man next to the computer. This fellow is interested in your exploits and would love to hear all about them. From a collection of available words, assemble a brief profile of yourself and tell it to the man.

After you defeat the Gym Leader Norman, visit Wally's Dad to receive HM03 Surf. This move allows your Pokémon to learn how to surf the sea and you can use it to travel the water bodies of Hoenn.