From the Azurilland Wiki, a database for the Pokémon series that anyone can contribute to
Jump to: navigation, search
← Gengar | Onix | Drowzee →

Onix (Japanese: イワーク Iwaaku) is a Rock/Ground-type Pokémon introduced in Generation I that evolves into Steelix when traded while holding a Metal Coat.

Onix is a Rock Snake Pokémon. Its serpentine body is made up of large boulders and little pebbles. It has a long horn atop its head and small eyes.

Onix can have the ability Rock Head or the ability Sturdy. Rock Head prevents Onix from recoiling. Sturdy gives Onix immunity to OHKO moves. When it is burrowing underground, it can cause rumbles and earthquakes. It can dig up to 50 MPH. It has a compass in its brain that can tell what direction Onix is facing.

Onix evolves into Steelix when traded while holding a Metal Coat. 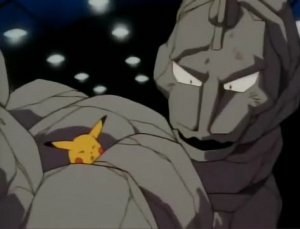 Brock's Steelix as an Onix

Brock received Steelix as an Onix from his father, Flint, on his tenth birthday, as seen in a flashback in Having a Wailord of a Time. Onix was Brock's first Pokémon and has consistently been his strongest. 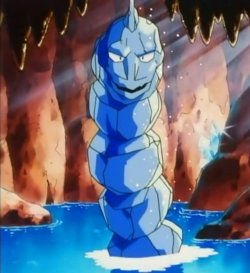 The Crystal Onix's first and only appearance is in the anime episode The Crystal Onix. Ash and his friends first heard of it through a note they found in a bottle floating in the ocean. The note was written by a little girl named Marissa. She wanted to find the Crystal Onix to help her brother, Mateo, gain inspiration to make glass Pokémon statues. Mateo told a story of how his grandfather discovered the Crystal Onix and then was able to make extraordinary sculptures afterwards. One of those sculptures included the Crystal Onix itself.

Its name comes from "Onyx," a black stone that can be found in jewellery or it comes from the end of the word tectonics.