The Old Chateau (もりのようかん Forest Manor) is an old abandoned mansion in Eterna Forest. It is apparently haunted.

The Old Chateau is not important to the plot. When the player comes here, you see Gardenia in front of it. When spoken to, she tells the player that it is thought to be haunted, and she would explore it but she is busy. It is hinted she may be afraid of the place, due to stammering.

The Old Chateau is a haunted mansion, and houses many ghosts. 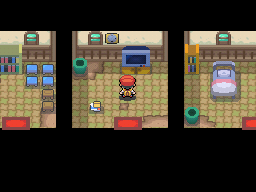 The room with the TV used to encounter Rotom