On their way to the next island Ash and co. meet a Nurse Joy who was "more buff" than the other Nurse Joys they met so far in Misty's opinion. She explains that because the group of islands are so small they don't have Pokémon Centers, so she goes from island to island to help heal the hurt Pokémon. Inspired by this, Tracey makes a new sketch called "Nurse Joy: The Pokémon's Florence Nightengale". When helping a herd of baby Seel Team Rocket appears to capture them. After calling for help, the giant Magikarp that Nurse Joy saved years ago not only answered the call, but evolved into Gyarados and help them beat Team Rocket. 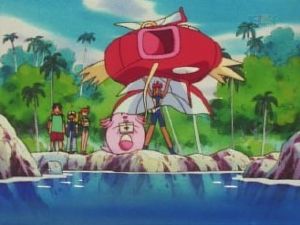 Not you're average Nurse Joy

~Tracey drawing a sketch of the Nurse Joy they met.