"As the Gym Leader, I can't express how upset I am... But as a father, it makes me both happy and a little sad. It's odd..."
— Norman, Pokémon Ruby, Sapphire and Emerald.

Norman (センリ Senri) lives in Petalburg City of the Hoenn region. He is an expert on Normal-type Pokémon, from which his name is derived. He will award the player the Balance Badge if you defeat him. He is also the player's character's father.

In the Ruby, Sapphire, and Emerald games, Norman is the protagonist's father. During the game, he appears on TV at the beginning of the player's adventure, and is mentioned by his good friend Professor Birch in conversation when the player first meets Birch. It is also Norman who lends Wally the Zigzagoon he uses to catch his first Pokémon, Ralts. Norman then wishes to battle the player, only that he/she must get the first four Hoenn badges first. After defeating him in Omega Ruby and Alpha Sapphire he states that "As the Gym Leader, I can't express how frustrated I am." He then goes on to say that "But, as a father, it makes me both happy and a little sad. It's odd." If you obtain the Eon Ticket through Streetpass/Event, after you have obtained the Mega Bracelet, go to the gym and enter conversation. He will escort you to Slateport Harbor where you will be eventually taken to Southern Island to catch either Latios (Alpha Sapphire) or Latias (Omega Ruby)

His role in Pokémon Adventures is similar to his video game role, as he is the father of Ruby. Norman is shown to be quite calm. He was originally going to be a gym leader in Hoenn five years prior to the start of the Ruby and Sapphire story arc. He and Professor Birch brought their families along.

There a wild Salamence attacked Professor Birch's daughter Sapphire, but Norman's son Ruby saved her, resulting in him receiving a scar on the forehead. This event caused Ruby to believe he needed to be more soft and Sapphire to toughen up to protect herself. The wild Salamence then went into the nearby research building resulting in Rayquaza escaping from the building. Norman is then banned from becoming a gym leader until he tracks down where Rayquaza is.

During the causing of mayhem in Hoenn all Gym Leaders had a meeting, they talked about which Team is good, Team Magma or Team Aqua. He was the only one who didn't vote. Though in the end, both Teams were causing mayhem in the entire region. The later his past was and he was shown to be stict but cared for his son: Ruby. But in the end because of summoning Rayquaza he was fatigued, in addition he was burned because of Maxie ordering his Pokémon to use flamethrower, but he was later revived by Celebi just like Steven.

He was the last person to be challenged by Sapphire.

In the anime, he is the father of May and Max, and the husband of Caroline.

Very early in his Hoenn journey, Ash Ketchum arrived with May in Petalburg City in the hope of getting his first gym battle. Ash found the Petalburg Gym and met Max. May stopped him and allowed Ash to meet her parents, Caroline and Norman. Norman turned out be to the real Petalburg City Gym Leader. Norman used his Pokémon, a Vigoroth, to save May's Torchic from Team Rocket.

Norman is a good friend of Professor Birch and was most likely to have been the person to send May to Littleroot Town to get her first Pokémon. As May did not initially like Pokémon, this seems to have created some distance between the two. Before Ash knew that Norman was May's father, he commented that it sounded like she knew the Petalburg Gym Leader pretty well, to which she replied, "No, I just wish I did" and becomes subdued. 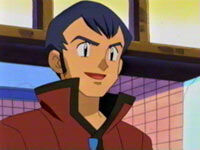 The day after that, in Love, Petalburg Style, May and Max tried to figure out why Norman and Caroline are getting all worked up as Ash tries to save Norman's three Pokémon from Team Rocket. It all turned out that Norman had Nurse Joy set up a special firework display to make fireworks in a form of a Beautifly as a wedding anniversary gift.

Ash had his gym battle with Norman in Balance of Power. Using his Grovyle, Pikachu, and Torkoal, Ash defeated Norman's Pokémon, much to Max's dismay. Max stole the Balance Badge and locked himself up in Norman's greenhouse. Norman was able to get Max under control and Max gave Ash his Balance Badge.

Fourth Rematch and Beyond