From the Azurilland Wiki, a database for the Pokémon series that anyone can contribute to
(Redirected from Noland)
Jump to: navigation, search

Factory Head Noland (Japanese: ファクトリーヘッド ダツラ Factory Head Datsura) is the first of the Frontier Brains in the Hoenn region. He is called the Battle Factory Noland. He has the same title as Thorton but they aren't related.

After you defeat 20 trainers in a row at the Battle Factory, Noland will appear and fight you with 3 random Pokémon for the Silver Knowledge Symbol. He will challenge you again after you defeat 41 trainers in a row for the Gold Symbol, using random Pokémon like the first time.Noland wears a red cap a long greyish/white coat which he leaves open with a short sleeved shirt tucked into trousers with a belt and red shoes which he tucks his trousers into.

In the anime, it seems that he has befriended an Articuno, which he uses to battle Ash's Charizard. 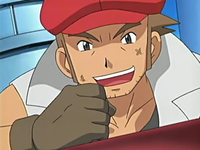 Noland in the anime

He flies with Articuno every night in his plane. He is an aviator and he fails every time, which is the reason why he has befriended Articuno. He was on one of his nightly flights and he saw a bird Pokémon hurt; that bird Pokémon was falling down from the sky. He realized that bird Pokémon was Articuno and he had to save it. So he made Articuno fly on his wing and saved Articuno. Articuno liked him and they became friends. His assistant at the factory questioned him why he did not catch Articuno, but Noland has never given him a proper answer.

He battled against Emerald and lost but he enjoyed talking to Emerald as Emerald also has knowledge. Though afterwards he was found lying on the floor knocked out after sometime. Everyone thought that Emerald was the culprit, but he proved his innocence. Afterwards he awakened after being knocked out, and was trying to solve the message on how to be able to ask a wish at Jirachi.