Narissa is a trainer who appeared in Dealing With a Fierce Double Ditto Drama!. She owns two Ditto: a normal one and a shiny one. She bears some common ground with Duplica, as they both mimic other trainers (though Narissa only mimics Flint because he is strong and she is weak).

No one knows what Narissa looked like before she started imitating Flint but her physical characteristics are brown hair and blue eyes. 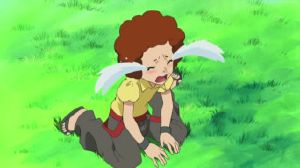 At first she talked like a tough girl, and wanted to pick fights with people who made fun of her, and she had a nasty attitude when she lost to Ash. However,when she cracked under the pressure of Brock's words, she is revealed to be nice and a crybaby.