Nacrene City is an old city in eastern Unova, located between Route 3 and Pinwheel Forest. It's peculiar cityscape was made up of abandoned textile factories and century-old warehouses, until enterprising young artists began using them as studios. This was essentially the beginning of the city, and it is still known as the city of art to this day, attracting many creative artists and poets. A disused railroad lies in the south of the city.

The second Gym of the region, which doubles up as a fossil museum, is found here. There are a few other notable places to visit too; such as Café Warehouse, which has a Soda Pop special on Wednesdays; Loblolly's studio, where Loblolly designs furniture for you to use in the Dream World; and a warehouse shop selling battle items.

When you first arrive in the city, Cheren is waiting to talk to you about the Gym, and advises that having a Fighting-type Pokémon will give you a big advantage. He kindly hands over a few Chesto Berries as well. However, when you head to the Gym you'll find N, who shares his opinions on Pokémon before challenging you to a battle.

After defeating him you can go inside and check out the museum, with Lenora's husband, Hawes, giving you a guided tour. Amongst the curiosities are a Dragon Skull, an ancient round stone that was buried in the desert, and a meteor that has a space virus attached to it. The latter can be used for changing Deoxys's forme. You can also have fossils restored here by the woman behind the right counter. There is also an in-game trade in one house, with a girl named Dye offering to trade you a Petilil for your Cottonee (in Black), or Cottonee for Petilil (in White). In this trade, you are given the Pokemon exclusive to the other version.

Once you've beaten Lenora, Hawes runs in and informs you both that Team Plasma have taken over the museum. Team Plasma steal the Dragon Skull and vanish in a puff of smoke. You and Lenora chase after them and bump into Burgh, Cheren and Bianca who offer to help after hearing what's going on. Cheren and Bianca stay to protect the museum whilst you and the others search for Team Plasma.

You'll head to Pinwheel Forest with Burgh, but not before Bianca gives you the Dowsing Machine, allowing you to find hidden items. 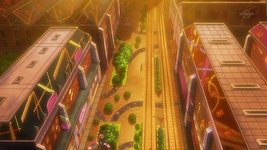 Nacrene City in the anime

Later in the story, you'll return here after the events of Relic Castle and be given the Light/Dark Stone by Lenora.

In Pokémon Black 2 and White 2, Nacrene City can be visited only after beating the game, due to the Skyarrow Bridge being closed until that point. The Gym is now solely a museum and Lenora is no longer the Gym Leader. The final Move Tutor is also found here, and he accepts Green Shards in exchange for teaching Pokémon moves.

A Move Tutor in one of the houses will teach Pokémon exclusive moves in exchange for Green Shards. He mostly teaches support moves, although also teaches one of the most powerful Dragon-type moves in the game, Outrage.