From the Azurilland Wiki, a database for the Pokémon series that anyone can contribute to
(Redirected from Musical Theater)
Jump to: navigation, search

Pokémon Musical is a feature in Pokémon Black and White that replaced the Pokémon Contests, Super Contests and the Pokéathlon of earlier games. It features dressing up and dancing in its competitions. The Musical Theater building is located in Nimbasa City. It also appeared in Pokémon Black 2 and White 2, in which it can be used after using Unova Link to sync the game with the first Black and White games.

There are four main shows to choose from; Stardom, Forest Stroll, A Sweet Soiree, and Exciting Nimbasa. An additional show, Charming Munna, is available to download from the Pokémon Global Link.

Once you pick the Pokémon you want to use, you outfit them with props that fit the show's theme. The themes are elegant, cute, cool, and quirky. Once the musical is done, you'll have fans who will support you, and have a 50% chance of giving you a prop to use. 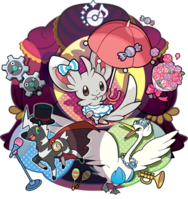