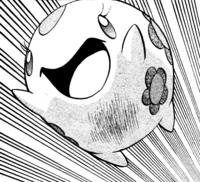 Musha is Black's second known Pokémon. It is used by Black to eat the dreams that "blacken" his mind, disabling him to think straight. Black refers this to be called "Detective Time".

Musha is gluttonous and can eat anything, even its trainer's dreams using Dream Eater. Musha also has a tough defensive meganism.

Like Brav, Black had Musha since he was a child and nicknamed it Musha after its evolution Musharna. It appeared alongside Brav in Choices where it, Brav, and Black's Tepig, Tep, were taken by Black and left Nuvema Town to take on the Unova League.

In Battle at the Dreamyard!, Musha ran away from Black after sensing a powerful dream. Black found him being kidnapped by Team Plasma. Since Black's head was full of his dreams of beating the Unova League and he couldn't think of any way to defeat them, Musha rushed away from Team Plama and after its trainer. With Musha, Black defeats Team Plasma.

In ABW13, he battled Lenora's Stoutland shortly before being switched out by Roar. It later came back out after both trainers had one Pokémon left since Brav was defeated by Last Resort, it defeated Stoutland with a powerful Zen Headbutt.

At the Driftveil City Gym, Black used Musha again during his Gym battle with Clay. Musha fought with Clay's Palpitoad while being trapped by its long tongue. Musha knocks out Palpitoad after using Zen Headbutt, but was also knocked out in the process.