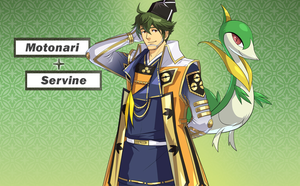 Motonari is the leader of the Greenleaf Kingdom. He is a reasonable and rational warrior who shows exceptional tactical awareness in battle. His dream is to dedicate himself to the academic research of Pokémon.

Motonari is one of two warlords the Hero/ine can battle after defeating Hideyoshi. When the player defeats him, he will retreat. At the end of the story, he gets his kingdom back.