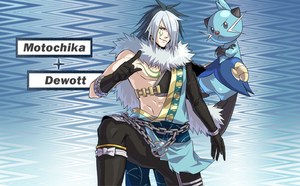 Motochika is the second of the two warlords that the hero/ine faces after defeating Hideyoshi. His home is the kingdom of Fontaine. His laid back exterior hides a passionate nature that never shirks from even the most fearsome opponents. He always seeking out his next battle.

He faces off against the Hero/ine in Fontaine. Ultimately, he loses and retreats.