Mossdeep City is a city in Hoenn. Tate and Liza (7th) are the Gym Leaders here. In R/S/E, the rocket launch center is taken over by Team Magma for rocket fuel later in the storyline. It is also apparent that Steven lives here. HM Surf is needed to get here and you will be able to use HM Dive from beating the Gym Leaders here. 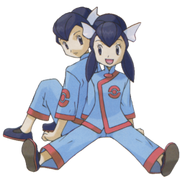 In Pok﻿emon Ruby, there's a house at the left side of the city(which a "Secret Base" finding kid lives in). The child's mother has a Skitty but when you interact with it, the dialog says "DELICATTY", not "SKITTY".