Misty's first appearance was in the very first episode of the anime series, Pokémon - I Choose You!. In this episode, she first meets Ash after fishing him out of the water when he was trying to get away from Spearow. Ash then takes Misty's bike from her in order to escape the Spearow, which is then wrecked by Pikachu's ThunderShock. Misty then tracks down Ash and follows him around on his adventures until he can pay her back. She eventually forgets about the bike and becomes one of Ash's closest friends.

(Born 1983) The youngest of the Four Cerulean Sisters. Her personality in the anime can be very complex at times. She can be very nice to her friends but will then quickly change moods in a short amount of time, particularly anger. She is quite proficient in anything having to do with water as can be seen in certain episodes where she has ability in fishing, swimming, and overall Water Pokémon training.

Eventually, after the Silver Conference in Johto, Misty's bike was repaired, leaving Misty without an excuse to follow Ash around. Around this time, Misty's sisters call her to inform her that they are going on a world tour and need her back at the Gym. Even though she wanted to stay with Ash, Misty felt obligated to watch over the Gym. The two went their separate ways, and Misty became the official Gym Leader at Cerulean City's Gym.

In the series, Misty first is seen wearing a yellow tank top with red suspenders and light blue denim shorts. Her shoes were colored red and white, with a yellow streak in the middle. In this costume, her midriff was showing, although her belly button is not drawn most of the time (it is, however, shown when she is wearing a bikini).

Misty's second costume is later shown after she meets up with the main group in Hoenn, after she had already left. Here she wears a yellow, sleeveless jacket with a blue collar, and a large blue button. She also wears short, form-fitting shorts that is connected to a crimson colored upper body piece, which may be a swimsuit. Her shoes are now light and burnt orange. 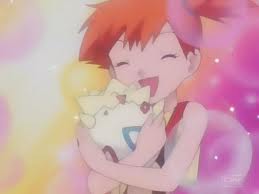 In Pokémon Chronicles, Misty is wearing a sleeveless yellow sweater and a blue shorts and a white belt and dark purple shoes. 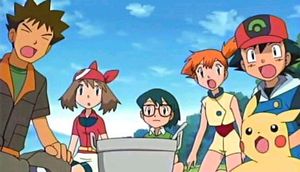 Misty with Ash's friends in Hoenn.

Misty has only appeared as a guest star in the remainder of the Pokemon series. In one of her cameo appearances in the Advanced Generation series, her Togepi evolves into Togetic. Misty releases Togetic after it chooses to stay behind to defend the Mirage Kingdom. After Ash finishes competing in the Hoenn League, he returns home to Pallet Town to find Misty waiting for him. However, she isn't the only one to rejoin Ash, as May, Max, and Brock join him as well for the Battle Frontier challenges. She travels with Ash for two episodes, and shortly after returns to her Gym.

In Pokemon Jirachi Wish Maker Ash mentions that he misses her every day and that they will always be friends forever.

Misty did not appear at all during Pokemon: Diamond and Pearl; although Ash mentioned her to Dawn when he once used her fishing lure to catch Buizel.

Misty is seen briefly in Pokémon DP Special Episode 2 in a photo, as well as May, Max, Ash, Pikachu, Dawn, and Piplup, in memory of their absence from the series.

Misty has not been on-screen since then, and the future of her appearing again is uncertain.

Misty has a slight inferiority complex, mostly due to her three sisters Daisy, Lily, and Violet who formed the group "The Three Sensational Sisters" (their synchronized swimming group) and refer to Misty as the "runt". This complex diminishes over time as Misty grows closer to Daisy. The Sensation Sisters are the ones who usually run the Cerulean Gym, although Misty battled Ash when he challenged the Gym for his Cascade Badge.

In the early episodes, Misty is depicted as having a quick temper, spoiled attitude, and a stubborn temperament. In the third episode, as she and Ash are traveling through Viridian Forest,

Misty's least favorite Pokemon are Bug-types; she freaks out, whenever she encouters a Bug-type, this was first introduced when she refused to befriend Ash's Caterpie. Misty makes a statenen that,Bugs are one of the three things she strongly dislikes, the other two being carrots and peppers.

As the series, she gradually shows herself to be kind and sensible. She reins in Brock when he becomes enamored with girls, often pulling him away by the ear. She demonstrates a secret crush on Ash (which is hinted at in many episodes) which, while likely reciprocated, is never acted upon.

Misty aims to be a world-class Water-type Pokémon trainer despite her sisters' ridicule. Her well-trained Pokémon reflect her aspiration. She admires the Ice-type trainer Lorelei.

When a Pokémon egg that Ash had been carrying in his backpack hatches, the new-born Pokémon Togepi chooses Misty as its "Mama". This causes Misty to take on a motherly role to Togepi, being virtually inseparable from it until its evolution. After it evolved, she released it into the Mirage Kingdom to protect other Togepi.

She is currently acting as the gym leader for the cerulean city gym. 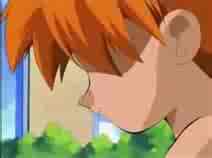