She has mostly the same appearance with her anime and game counterpart.

Apparently, Misty helped Red teach his Pikachu how to surf.She was shown to have some interest in Red. Misty appears to be living in a mansion and, unlike her anime counterpart, doesn't have sisters.

She meets Red when her Gyarados was out of control. After they fought Gyarados, they asked Professor Oak what could've happened. He suggested that Team Rocket might have been the caused. He said 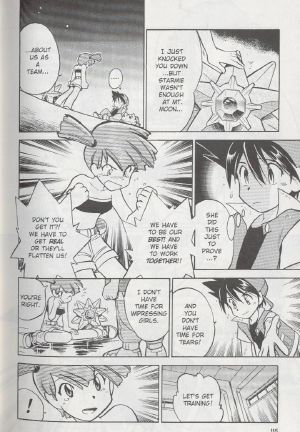 Part of the story

they should go to Mt. Moon, on the possibility that Team Rocket might be there in search of Moon Stones. When they went to Mt. Moon, in Red's and Misty's attempts to thwart Team Rocket, Misty had gotten knocked down. Red stepped into play and fought his best. After they escaped, they went to Cerulean City, where Red was shocked to discover that she was living in a mansion. At dinner, Red kept bragging about how he saved Misty, making Misty very angry. After a surprise attack, Red kept bragging saying that he will show his skills by fighting the Cerulean City's Gym Leader (not knowing it was Misty). Misty sent him to the Gym and confessed that she was the one who attacked him. She said the reason why she attacked him was because that they need to improve on their own power and do their best.

Most of the Gym Leaders, just like her, got attacked and their badges were taken so that they could be used to summon Lugia, which was later thwarted by Yellow.

Misty was first seen traveling with Brock and Erika to a urgent gym leader meeting called by Director. They were traveling in Tohjo Falls to get to Johto. Then they encounter a broken bridge. Brock then brought out Onix to support the bridge. The three were attacked by Crobats while walking on the bridge. Due to the distraction of the Crobats, Onix became unbalanced knocking Misty down a waterfall. Saved by her Starmie she climbed up the waterfall. On her way up, she found a Krabby in trouble. She saved the Krabby and passed out in a cave. She said she saved the Krabby because it reminded her of Red's Krabby. She then met Suicune in that cave. After a brief fight in the waterfall, Suicune wants Misty to be its master because she is Water-Type Pokémon expert also she would risk her life to save even the smallest Pokémon. She reunited with Brock and Erika to continue their journey to Johto.

She is shown along with the other Kanto Gym Leaders in a friendly competition against the Johto Gym Leaders. She fought against Whitney and won.

Team Rocket came to the stadium separating the two region's gym leaders in two carriages. Misty teamed up with Blaine, who has Entei, and Lt. Surge, who has Raiku, to fight the evil Masked Man (Mask of Ice).

After the battle, Misty tries to call Erika's PokéGear to inform her about the flower (given by Erika) being destroyed. Misty is actually calling Red since Erika loaned her PokéGear to Red. After the talk, she returned to Kanto.