Mistralton City is located in western Unova. The surrounding area is dominated by mountains and forestland, making it a rather difficult place to get to on foot. Chargestone Cave is to the south of the city, with Route 7 and Twist Mountain to the north.

Like many areas in the western part of the region, it has a cool climate and often rains. This city is unique as it is the only city in any of the Pokémon games to have a functional airport, although it's solely used for transporting cargo to faraway regions and isn't open to travellers.

The Pokémon Center is located in the east of the city. As well as the Poké Mart section stocking weather changing TMs, a man here can tell you what type of Hidden Power your Pokémon can learn.

To the right of the Pokémon Center is the house where the Move Family live. Conveniently, both the Move Deleter and the reminder girl are here. The reminder girl will help your Pokémon to relearn a move in exchange for one Heart Scale. Another girl here will give you advice on obtaining Heart Scales, telling you about a lady in the Cargo Service building, and also talking of a woman in Driftveil City who gives Heart Scales if you show her the right Pokémon.

In the western part of the city, the Mistralton Cargo Service building is found by the entrance to the airport. It doubles up as as a control tower to keep the skies safe and the flights problem-free. A woman in here will give you a Heart Scale in exchange for ten Sweet Hearts. 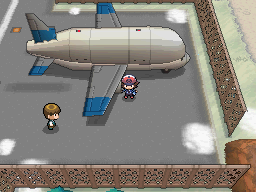 Plane on the runway.

Past the cargo service building you'll find the runway, with the Mistralton City Gym- a converted airplane hangar- at the north end. The south section of the runway differs between Black and White. In White, there are fields with vegetables grown by natural means, whereas greenhouses litter the area in Black. It seems that the vegetables grown here are the main cargo being flown to other regions.

This is where you'll meet Professor Juniper's dad for the first time. Cedric Juniper will upgrade your Pokédex so you can see the different forms of Pokémon.

Skyla, the Flying-type specialist and Mistralton City Gym Leader, is with him and says that she's going to the Celestial Tower to check on a weakened Pokémon, making her unavailable to battle. Once you've investigated the tower, which is on Route 7, you'll be able to challenge her.

When you've beaten Skyla and gained the Jet Badge, you'll bump into N outside the Gym. He tells you that he's planning to resurrect one of the Legendary Dragon-type Pokémon.