Mistralton Cave (Japanese: フキヨセの洞穴 Fukiyose Grotto) is a forgotten cave in Unova, said to be sealed with hints of a legend's presence. It is located at the northeast end of Route 6. To go there, you must surf past the water. There are three floors in the cave, with the top floor—the Guidance Chamber—being home to one of Unova's legendary Pokémon. As it is pitch-black inside, Flash is useful for exploring the area in detail.

When you get to the Guidance Chamber, an old man will approach you and tell the story of the "Musketeer Trio": in the distant past, when Pokémon and people lived separately, a war between humans caused an intense fire in a forest where many Pokémon lived. The Pokémon were in big trouble until Cobalion, Terrakion, and Virizion appeared and combined their skills to lead the Pokémon to safety. The three then stopped the war and disappeared. 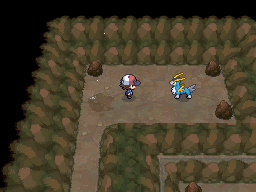 The old man explains that he's hunted the trio for decades and believes one of them is hidden in the cave. However, he also says that the trio are very distrustful of people and will attack if approached.

Further on, in the northwest of the Guidance Chamber, Cobalion is waiting. After you capture it, it sees that people can be trusted and communicates this to Terrakion and Virizion, who release the seals of their hiding places in Pinwheel Forest and Victory Road.