From the Azurilland Wiki, a database for the Pokémon series that anyone can contribute to
Jump to: navigation, search
← Plusle | Minun | Volbeat →

Minun (Japanese: マイナン Mainan) is an Electric-Type Pokémon introduced in Generation III. Minun is a Pokémon which is best when battling with Plusle in a Double Battle because of the ability Minus. Plusle also powers up when it is fighting with Minun with the ability Plus. When the two are battling on their own, they are much weaker. Plusle and Minun are best friends under any circumstances.

Minun bears a remarkable resemblance to Pichu and Pikachu. Minun have short tails with flat blue minus signs on the end of them, while their cheeks and the tips of their ears are blue, and have minus signs voided in the middle. The rest of it's body is a tan color. 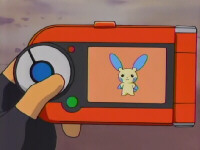 A Minun in a Pokédex

Minun is a cheerful and supportive Pokémon, always encouraging comrades in battle by using the spark pouches in its cheeks. It is very compassionate towards its friends, and is known to cry upon witnessing a friend lose a battle. Its kind are commonly referred to as cheerleaders for these actions.

Minun's stats are geared towards defense whereas Plusle's stats are sweeper-oriented. Minun's Movepool is nearly identical to Plusle, except that Minun can learn Charm and Trump Card but lacks Last Resort.

Minun does not evolve.

Minun is rarely seen in the Pokémon anime without Plusle. Its first two appearances is the same Minun. It also appears with Plusle in the seventh movie and accompanying short. In this movie he is kidnapped by Deoxys and later becomes, together with Plusle, the first Pokémon of Tory. Its first appearance is in episode 314, where Minun and Plusle, are attacked by Team Rocket. In Pokémon DP Sinnoh League Victors, Dawn's rival Ursula has a Minun.

Minun's only appearance is in the Pokémon adventures.

When the Brawl disk was hacked, some coding was found for two characters that mimic the Ice Climber's actions and style of brawling. The coding was titled Pra & Mai, which are the prefixes of the Japanese names of Plusle and Minun, which got a rumor going around about partial Brawl entrance of Plusle and Minun.