From the Azurilland Wiki, a database for the Pokémon series that anyone can contribute to
Jump to: navigation, search
← Metang | Metagross | Regirock →

Metagross (Japanese: メタグロス Metagurosu) is a Steel/Psychic-type Pseudo-Legendary Pokémon. However is not an actual legendary because it can evolve, be found more than once, and breed. 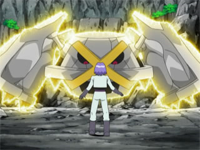 A shiny Metagross in the anime.

Metagross are made up of two Metangs that fused together. It has four brains which are all linked together as one by a complex neural network with the intelligence to solve highly complex equations faster than a super-computer. In the game, Metagross has the ability "Clear Body", which prevents any of its stats from being lowered.

Metagross is the evolved form of Metang as of level 45, and is the final evolutionary form of Beldum.

It is based off mech spiders.

Metagross' name may be derived from the word metal and the French word gros, which means "big".