From the Azurilland Wiki, a database for the Pokémon series that anyone can contribute to
(Redirected from Mega Gardevoir)
Jump to: navigation, search
← Kirlia | Gardevoir | Surskit →

[[Category:White Pokémon]] Gardevoir is a Psychic/Fairy-type Pokémon introduced in Generation III. It is one of the two final evolved forms of Ralts.

A human-like Pokémon, Gardevoir is over five feet tall. The classical tutu-type skirt seen with Kirlia is now a long, flowing gown that completely covers its legs, giving the appearance that it is floating. Gardevoir have long, slender, white legs underneath their gown. The red horns that were once on Kirlia's and Ralts' head have moved down onto Gardevoir's chest and back. Most of its face is obscured by its green 'hair', with only some white and its large red eyes visible. It also has long, slender arms that are green like its hair.

There are no gender differences between a male and female Gardevoir. The shiny version of Gardevoir has light blue "hair" and arms as opposed to light green, and its "horns" and eyes are orange instead of red. Due to their humanoid appearance, fans have made many tributes to this Pokémon and the rest of its evolutionary family because they think of Gardevoir and Gallade as the most popular couple because of their resemblance of human families (Gallade: father, Gardevoir: mother, Kirlia: elder sister, and Ralts: younger sibling).

Gardevoir can have two special abilities, the first being Synchronize, the second being Trace. Synchronize will pass on a Poisoned, Paralyzed, or Burned status effect(but not Sleep or Frozen) to the opponent Pokemon, and it will also increase the chance of meeting a wild Pokémon with the same nature as Gardevoir. The ability Trace will copy the opponent's ability for the duration of the battle.

Additionally, Gardevoir are able to sense the feelings and emotions of Pokémon and people. One of its main abilities, though, is a kind of precognition, which allows it to sense the future. Gardevoir are said to protect their trusted Trainers at all costs, even sacrificing their own lives to keep their Trainers safe.

Gardevoir evolves from Kirlia upon reaching level 30. Gardevoir is one of two evolutionary forms of Kirlia. 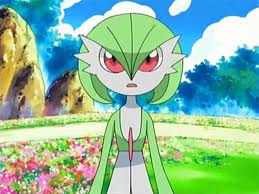