From the Azurilland Wiki, a database for the Pokémon series that anyone can contribute to
(Redirected from Mega Charizard)
Jump to: navigation, search
← Charmeleon | Charizard | Squirtle →

Charizard (pronunciation: CHAHR-ih-zahrd) is a dual-type Fire/Flying-type Starter Pokémon of the Kanto region, evolved from Charmeleon and Charmander. Charizard is the version mascot of Pokémon Red and its remake, Pokémon FireRed.

Charizard is a large dragon-like Pokémon that differs greatly from its pre-evolved form. The red skin color of Charmeleon is no longer apparent, as Charizard appears to have reverted back to the orange color of Charmander. The single horn that was on the back of its head is now two, one on either side. The most notable difference between Charizard and its pre-evolved forms are the large wings that have developed on its back. Given its dragon-like appearance, it makes sense that Charizard is capable of learning many Dragon-type moves.

Charizard evolves from Charmeleon as of level 36. Charizard is the final evolved form of Charmander. 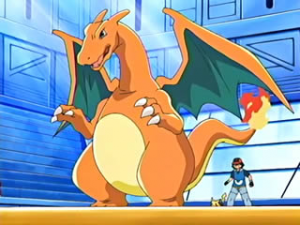 Ash Ketchum owns a Charizard, who is currently in training in Charicific Valley. At one time, Ash's Charizard was disobedient, never listened to any of his commands, and cost him several battles. After a battle with a Poliwrath, in which he was frozen by an Ice Beam, he was defrosted by Ash, the Charizard decided to behave himself. Charizard is currently Ash's strongest Pokémon, albeit still training to become stronger. It has defeated legendaries, such as Articuno and Entei, and has much more potential.

Jessie was given a Charizard by the Team Rocket Delibird in the episode Grating Spaces. This however, was a mistake as it was meant to be given to Cassidy and was taken back.

Liza of Charicific Valley owns a female Charizard named Charla, who is seen in Charizard's Burning Ambition, Great Bowls of Fire!, and Better Eight Than Never. Her Charizard is also seen in the third Pokémon movie, The Spell of the Unown.