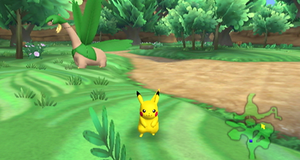 Meadow Zone is a location in PokéPark Wii: Pikachu's Adventure. This zone is a lush grassland with a river flowing in the center. A cliff in the shape of Dialga and Palkia makes it a unique environment. This zone is mainly inhabited by Grass and Bug-type Pokémon. 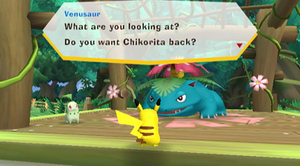 The story takes place with Pikachu inside a forest after being sent to PokéPark by Mew. Pikachu ventures out through the forest and encounters one of his friends, Chikorita. Outside the forest, they meet Bulbasaur and challenges Bulbasaur's attraction. However, after winning and receiving the prism piece, Chikorita is kidnapped by Treecko and Mankey who is taken to the park keeper, Venusaur.

Pikachu strolls around Meadow Zone and encounters the front gate to Venusaur's den. However, it is guarded by Treecko and Mankey, whom Pikachu challenges to get through to the den. Once defeated, Pikachu enters the den and finds Venusaur with Chikorita. Venusaur then asks Pikachu to challenge his attraction in return for Chikorita and a prism piece. Once Pikachu defeats Venusaur's attraction, he is now told to settle a dispute with the other park keepers, Empoleon and Blaziken; Pikachu now has access to the Meeting Place. 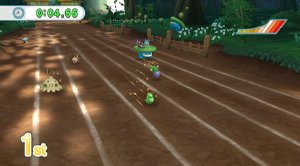 Bulbasaur's Daring Dash is a standard race between your Pokémon and six other Pokémon. This race is timed, and the first one to the finish line wins the attraction. 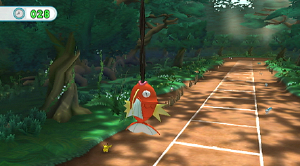 Venusaur's Vine Swing is a targeting game where the Pokémon must build up speed while hanging on a vine. The Pokémon releases from the vine and lands. The longer they are from the starting point, the better.